You are here: HomenextTopicsnextPeoplenextWorking life in the 1930's 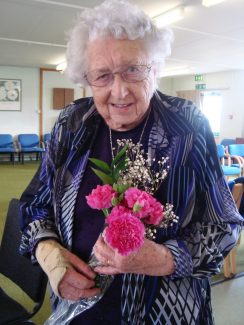 I came to Billericay in 1938, I was still working in London before I was called up and worked in Stoke on Trent. Then my Mother died and we decided we’d settle in Billericay with Dad; the rest of the family, Grandmother and my brother and younger sister. My sister became a nurse and my brother went into the Navy and left me looking after Dad, but I was able to go back to work eventually at the local Food Office – first of all it was in the High Street where Summerfields is (now the Co-op), it was in the house there, then we went to Chapel Street on the corner of Hillside Road, now that’s been pulled down as flats have been built along there.

When the rationing began to get easier I knew I would have to leave eventually and the only source of work which was open to me really was the Civil Service.  So Joyce Norris as she became – she was Joyce Carpenter, she said would I like to work for the Council. I said no I don’t think so and I found my own job working at the dairy farm. That’s where I met Phil and I married him in 1958 when I was 37 and we had three children.

The dairy farm was in the Avenue where I still live but there was also an entrance from Mountnessing Road.  At that time it was at the side of the tennis courts and the cricket field. Of course they’ve now both been built on, they’ve moved out to Blunts Wall.

I delivered the milk in bottles from the van, it was being then treated in the South East Essex Wholesale Dairies in Cranes Farm Road.  Ricketts was just one of their suppliers. I suppose its because the Governor as we called him was getting old, he decided to sell. He sold out to Lord Rayleigh, and Lord Rayleigh sold out later to what is now Dairy Crest. So I believe it is still going strong.