You are here: HomenextTopicsnextPeoplenextStrictly Billericay

Dancing and romance at The Archer Hall 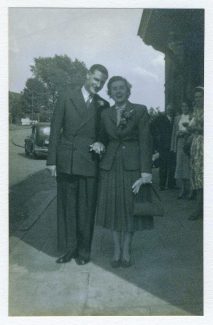 When I was about 15 years old I joined the ballroom dancing class at the youth centre at Billericay School, where the teacher was Miss Pauline Green who was the daughter of Inspector Green who was in charge of Billericay police station.

At a youth centre Christmas Party a young man called Ernest Morley and his friend from Langdon Hills gate crashed the party and sat opposite me and my friend, I still do not know how they knew the party was on.  After the party we all went to the Dance at the Archer Hall – dances were held there most Saturday nights.

The dances were very popular; there were tables all round the edges of the hall and a live band on the stage.  Various bands played – one of our favourites was Eric Ricketts’ band called the Blue Lagoon, which consisted of about six people with saxophone, clarinet and drums.   Fred Fulcher played the drums; later in life Fred was well known in the town as the local traffic warden.  Another band that played included Norman Hale who was a marvellous sax player; when his band played Ernie would be the MC.

We went to almost all the dances and at the interval we would often go to the Rising Sun for a drink with Fred. On one particular occasion I remember walking down School Road to the dance – Ernie was the MC that night so I was on my own – it was snowing and as I walked it was so pretty, beautiful and quiet and the lights shone out from the hall as I approached.

The dances started at 8pm and finished at midnight and after the Christmas Eve dance we would walk down to St Mary Magdalene Church in the High Street for the Midnight service.

Later, we took private dancing lessons in Romford with Miss Pauline Green. We were working for our silver medal when Ernie was called into National Service in the RAF.

I was married to Ernie, my dancing partner for 54 years!