You are here: HomenextTopicsnextPeoplenextFirst Memories of Billericay and choosing a Church

First Memories of Billericay and choosing a Church 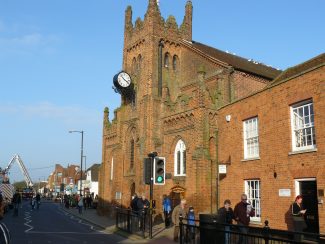 My first recollection of Billericay goes back to probably 1959 when as a 12 or 13 years old I came down to Billericay with my Uncle Charlie. He worked on the railways and he was visiting someone who was not well, name of Porter, who lived in Break Egg Hill.

I can remember going down to this shack down by the side of Norsey Woods.  I can vividly remember later we came out through a wicker gate into the railway track itself, this was still the time of steam, and we walked along the railway track into Billericay Station – my Auntie and Uncle and myself.   We went under this big viaduct which I didn’t know anything about at the time but I now realise it is the road, Norsey Road, and we were going underneath it, walking up into the railway.  That was my first introduction to Billericay. Also I have since found out that my wife, Susan’s  family had a florist in Billericay, alongside St Mary Magdalen or in Chapel Street, years and years and years ago.

Sue and I got married on the 26th of March 1977 and prior to that we were looking for a house.  We came from the East End of London; I’d been in London 31 years then, having been brought up in Manor Park.  We looked around and we eventually came upon Billericay, our first introduction to that was when we were driving through the country lanes and we came in through Mountnessing  and it was flooded so we had to turn all the way back and come back in via a different way.

We found our first house in Chalfont Road which looked onto the railway and our neighbours, we found out later, were Maureen and Dave Mander; an old Billericay family the Manders.  We decorated it and did it up and we got married on the 26th of March 1977 and we moved in after a short honeymoon.

We were already practicing Christians; I used to go to church in the East End and Sue where she was nursing in Redhill in Surrey, she was a midwife.  So we tried the churches out and the first church we went to was St Mary Magdalen in the High Street in Billericay, would have been in April 1977.

We also went to Stock Church and when I got there,  there were so many candles on the alter I thought they don’t need my money and then we sat down and it was smells and bells  – incense; I couldn’t wait to get out! As we went out there was Father Jeremy Bunting, bearing in mind the time he was wearing a white alb.  I was ahead of Sue trying to get out of the church and he bellowed out ‘Hello! Just married?’ and Sue had pulled me back and we said ‘Yes ‘ and he said ‘Shopping around?’ and we said ‘Yes’ and he said ‘Where else have you been?’ and we said ‘St Mary Magdalen in the High Street in Billericay’ and he said ‘oh down with the Protestants’ so that was one of our first introductions.

We settled on St Mary Magdalen and became very much part of the family of the church and got involved and it wasn’t long before I was on the Parochial Church Council and the District Church Council and then I later came on Basildon Deanery Synod. I also became the Treasurer of Basildon Deanery Synod.  I got onto the Halls Committee and in those days we had the wonderful Archer Hall and I was very much involved with looking after that and the finances and the refurbishment of it at one stage.

The Minister was David Greaves, lovely man, when we first went there.  We got involved in all sorts of things, we used to do plays in St Mary Magdalen.  I can remember many of those with a lovely lady called Sheila Bailey who used to organise them. We were her nightmare we would never do as we were told, we were often in the pub when we should have been rehearsing but we had great fun and enjoyment.   We used to organise a lot of events and things in the church, Sue and I; and we organised the Christmas Trees for St Mary Magdalen and Emmanuel Church.

I organised myself and later with Rotary, a number of music festivals in Emmanuel Church going back over a number of years.  We all raised considerable money for local charities, which was fantastic – to be part of that.  To get so many people coming into Billericay to perform including my old friend the Bishop of Bradwell, Laurie Green.  Laurie and I go back to our roots in the East End of London and we used to play jazz together, he on banjo and me on drums. Anything noisy I think is my forte and my wife sits quietly in the background making sure all the things happen!