You are here: HomenextTopicsnextPeoplenextJack Bartlett's Life in Billericay 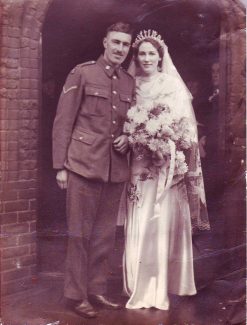 zoom
Jack & Letty at St. Mary's in the High Street

Jack Bartlett, born on 12 November,1914 in Thorpe Le Soken, Essex, came to Billericay during World War II and met his future wife, Letty, at the Mayflower Hall in Chapel Street. This served as an Army canteen to feed the many soldiers in the town. Letty was a beautiful local girl. Jack went off to war and was badly wounded in Norway and invalided home. After his wedding to Letty at St Mary’s Church in the High Street in 1941, the pair settled in their ‘Plotland’ bungalow in Scrub Rise and their daughter, Hilary was born there.

“I began working for the Post Office in 1946 and carried out all my deliveries using my old bike. I started around 4am each day and loaded up the bike before starting on my deliveries. Many of the roads around the town were not made up and the mud was awful in the winter,” remembers Jack. Jack was also responsible for delivering the mailbags to the main Brentwood Post Office and remembers several hazardous journeys through notoriously bad floods, including those of the terrible East Anglian floods of 1953.

“During the 1950s and ‘60s, many Billericay roads and buildings  were so primitive without sewers, gas and electricity and when we moved to Scrub Rise, there were 21 plots ready for bungalow building. My little home was the last bungalow of the plotland type to survive, but that, too has been demolished to make way for a posh modern home.”

At the point of retirement in the early 1970s, Jack’s beloved Letty died at the early age of 52. He threw himself into working for the Billericay Town Football Club doing valuable service as groundsman and bar steward in the social club. He has always supported the Blues.

A few years ago, Jack found life difficult to manage and moved to Hillhouse Court where he lived for about three years.  He has now moved to a nursing home in Basildon but has many fond memories of Billericay. He would love some of the people he knew to come to visit him. Phone Sylvia Kent for details.