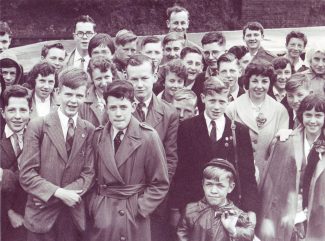 Although it’s years since I lived in Billericay, I have strong memories of the school and my classmates whom I still keep in touch with. I was born in a cottage on Laindon Common and went to the town’s only senior school which was in Billericay.

I began my acting career in the theatre, when the film director Ken Loach gave me my first part. This led to more than fifteen films including parts in Star Wars and Time Bandits.  I travel widely around the world and love taking part in Star Wars Conventions usually in the States.   This picture with me in the front shows the class with Mr Hewitt at the back and all my classmates at Billericay Station going on a trip to Norwich.  I think we also went to the Norfolk Broads at this was at the end of the 1950s.  As you can see, it was a very rainy start to the trip, but we had a great time.  I enjoy coming back to Billericay and I collect all the books that are written about the town.

Editors note: Mike played Logray in “Star Wars – The Return of the Jedi” and more recently Goblin in “Harry Potter and the Deathly Hallows: Part 2”