You are here: HomenextTopicsnextPeoplenextRecollections of Daphne Timmis

Miss Quilter at Great Burstead School and other memories 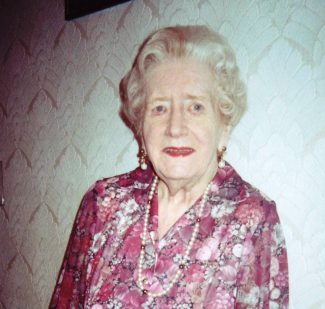 Growing up in South Green

The late Daphne Timmis (nee Savill) was born in South Green’s Grange Road on 6 September 1925.  Several years before she died, she was happy to take part in recording her childhood years growing up in Billericay, a town she loved.  Daphne retained many recollections of her early life at the Great Burstead School, where she was taught by the formidable Miss Quilter, who was her first teacher and whose name was given to the junior school.

Daphne loved attending school, but had to miss out on PT (physical training as it was then called) as she had had polio as a small child.  This didn’t upset her at all, as she loved doing the quiet things of life such as reading and needlework.

Daphne’s family on her mother’s side were well known in Billericay.  They were the Savills who kept the antique shop at approximately 14-18  High Street and there are some wonderful photographs of her grandparents lined up with their seventeen children.  Their home was in Hillside Road.  The photos can be seen in the Cater Museum.

Aged barely twenty, Daphne married and she and her new husband began farming up north, but life was very hard just after the war as they could not afford modern farm equipment and milking their herd of cows all had to be carried out by hand.  Eventually they returned to Billericay  leaving behind their agricultural life.

Daphne’s memories included shopping in the High Street where she knew everyone. “My father, Claude Savill, was very well known as his family had traded in the High Street for generations. I particularly remember Miss Wade who sold sweets and toys in her shop at No 40 High Street.  She died in St Andrew’s Hospital and was a kind, well thought of lady. Then I remember Bassams the decorating shop next door which was supposed to have an underground secret passage linked to the other side of the High Street.  The Spellers, a really old local family, lived right at the end of the High Street at No. 17 and these little old 300-year-old cottages were pulled down to make way for widening Western Road.  Things changed a lot after the war and I don’t really think for the better!”