The paraffin and cycle man 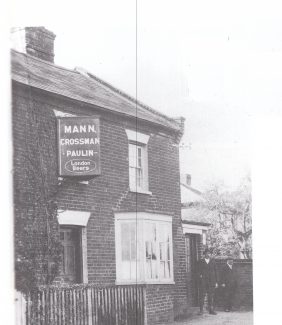 As Young lad as far as I was concerned Harry Houghton’s shop was the most interesting shop in South Green. The Building in Grange Road that was a few yards from the old post office stores was originally the Plough Public House but it suffered war damage so the pub was moved. The building is now the Doctors Surgery. The shop was in the front two rooms of the building and you entered by the side door next to the yard entrance. In the first room was the shop counter.

Harry Houghton was a genial tallish medium built man with wire rim spectacles. The store was a general hardware shop that sold a great variety of household products ranging from Nuts and bolts and screws bleach light bulbs and the like.  The best time of year, was October when in his glass topped counter, he sold an displayed a large range of loose fireworks. In the 1960’s a ten shilling note would buy you a biscuit tin full.

Harry Houghton was also the man you went to see when you buckled the front wheel of your bicycle (I called it a push bike because I spent more time pushing mine than riding it as it always had a flat tyre or a buckled wheel). Harry was a good at repairing bikes and had a good supply of cycle spares for just a few shillings. Harry’s shop would be frowned on now days by health and safety as it sold paraffin, turpentine and methylated spirits loose. You just brought your own receptacle (an empty lemonade bottle would do) and he would fill it for you. When he sold these liquids he would take you through to the adjoining room where the storage tanks were.  Quite a fire hazard.

N.B. Aladdin Pink Paraffin for heating was also delivered in bulk to house holds in South Green by a Vendor from Wickford  who owned a bowser tanker.