You are here: HomenextTopicsnextPeoplenextAudrey and Ernie Hale 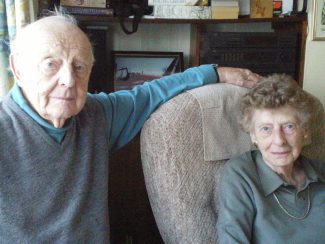 I suppose, it was much quieter than today, it was a nice country town with nice individual shops in the High Street, not as busy as it is now. The Green, South Green was a lot bigger than it is today because there was just a small country shop and a post office and a pub. That was all that was here and these two houses 38 and 40 were being built. The rest of Grange Road there was all trees and fields. There were several nurseries, garden nurseries, on the opposite side of the road. One nursery grew only Christmas trees and so every year we used to go down there to get our tree for the Christmas celebrations. At the back here was, all fields, you could see right across through to the kennels where they kept the hunt dogs which is why it is called Kennel Lane . All the hounds were kept in their kennels halfway down that road. When they had puppies, you would often see people walking the puppies. They used to look after them for a short period of time until they were old enough to be trained and more than once we had hounds in our garden. They would bring the hunt round and they would go scavenging through the garden because there were fields and cows at the end of the garden. The hunt was a very familiar sight down Billericay High Street. We have been stopped going down the High Street in the car, we had to sit there and wait for them to go by. It was quite common then and there wasn’t the traffic there, nothing like now.

Before we came here, a long time ago we understand that the Green was donated to the people and was not owned by the Council. It was given by Lord Petre’s family and apparently it extended quite a long way. They found that in the Archives so you can check that up. It should never have been taken by the Council. It can’t be built on. When we came here there were toilets, proper brick toilets and swings and a roundabout. These trees didn’t exist and a hedge went all the way round with a ditch, about twelve feet high. You could not see from here into the Green. It was a very thick hedge. They removed the hedge as there were gaps in the hedge and children were apt to run from the green through the gaps on to the road, so it was too dangerous. When we came here in 1955 there was one gas lamp at the end of the road and you have got to remember that the road did not go the way it goes now. There was more of a bend in it. When you go up to the shops, you will see a road behind the bus stop which was the main road. It used to bend round there and go up to Bell Hill. That was where the pub was originally. It had a tin roof to it. It was a rather a make shift building. That estate on the corner was not there, they were pre-fabricated houses from the war. They were there for many years and were well looked after with their gardens, they all looked very nice. Eventually the whole area was bought up and houses were built. They always had the garage opposite us. The doctors was over there and there was a little shop. The doctors was opposite on the other side of the road. He used to do his rounds on horseback. Even to us it was a novelty even then. They then built at the back, the Council Estate which was behind and here it was private houses. I think the houses along from here were originally farm cottages which were used for farm labourers, but they were privately owned when we arrived.

There was Harry Owton’s shop where the doctors is now. He was a man in great demand because he could do any kind of repairs, electrical to cars, irons, replace elements in electrical equipment and he had a wonderful stock of screws and things like that. Very useful shop that was. That and the grocer together with the post office were the only shops. Just along from us was a thatched house. All this land where our houses are was an orchard and at the side was the thatched house. The four pear trees in our gardens were all from the original orchard. The builders left those four trees and all the rest were uprooted and these houses were built. At the bottom there were elm trees which had to be cut down when they got the elm disease. Where there used to be all the elm tress we had to put a fence when they were cut down. The hedge we used to have in our front garden was all that was left of the original boundary hedge of the orchard. It was a Hawthorne hedge but also had some Holly. There was also a factory at the back which disappeared with the Council Estate. A lot of the ladies round here used to work there. In fact there were several factories on that road. There was an Engineers and the fruit nursery, Hygro Farm.

There used to be the winter quarters of a circus on Coxes Farm Road near where the school is and the animals were also kept there. We used to walk along Outwood Common Road and come on to Coxes Farm Road and would pick blackberries along the way. There was a grey horse in the circus which was quite famous and would appear on television quite a bit. You would recognize it trotting round the roads with its rider. Once some cows were let loose and we had them in our front garden. They came from Coxes Farm Road , they came down the road and across the green and a solitary policeman had to try and herd them up. Eventually some farm workers came to help and the farmer took them away.

Ernie would travel to London on the steam train and more than once they ran out of water and were stuck. Another engine would be brought to push it along. Then they electrified it and that was solved. There was a well known phrase used by the newspapers – the rape of the Billericay High Street was used when old buildings were knocked down and more modern ones were built.