You are here: HomenextTopicsnextPeoplenextMemories of Kathleen Walden (nee Martin)

A life in Billericay 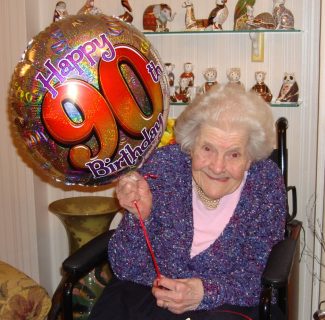 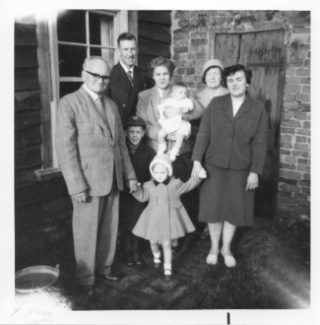 These reminiscences were collected during Kath’s 90th Birthday celebrations on 2nd January 2016.

I went to school at GreatBursteadCountyPrimary School in Laindon Road. Miss Bartlett was the PE teacher I think.

I then went to Billericay school. I was in Effingham house, the other houses were Grenville, Raleigh and Drake. Effingham’s colour was red. I remember Wilson Martin was one of the teachers.

I received a book for being monitor from Mrs. Cochran who I think lived in Lion Lane.

We used to play netball and shinty (a type of hockey).

I left school at 14 and looked after the house for a time as my mother was ill. My mother used to work for Dr. Wilson and I sometimes went to work for him instead of Mother.

I was in church with my friends – sisters Meg and Chris Halls, when war was declared, the sirens went off and we all ran home to School Road.

I was on the doorstep at home with my Mother and our neighbours the Kendal’s when a Germany bomber flew past so low that we could see the pilots. Mr. Kendal said if he had had his gun he could have shot them down! During the war I rarely went into the air raid shelter with the rest of my family, when the raids happened at night I insisted on staying in bed!

I remember a Rosaire’s circus christening with the elephants pushing the pram to the christening at St Mary’s church in the High Street.

We used to go to a club called the Ace of Clubs over the Co-op at the bottom of the High Street.

My first full time job was at Speeds Café when our family friend Lil Stewart told us there was a job available there. The Stewart’s lived in a cottage opposite St Andrew’s Hospital. Speeds Café was at the bottom end of the High Street where the Kamble take away is today.

At the cafe I was a waitress. Speeds also had a removals business.

One of the girls I worked with was Pat Sutton, she was one of my bridesmaids when I got married. Her father had a shop in the High Street.

I first met my husband Arthur Walden in the café when he was on leave from the navy. When he was demobbed he drove cattle lorries for Mason’s in London Road; Arthur would call into the café every day on his way to the farms.

We went to the fair at Sun Corner for our first date. We were married when I was 21 in 1947 at St Mary’s in the High Street, by Rev Smith who had christened me. He lived in Laindon Road. Arthur and I were married for nearly 65 years.

When we first got married we lived with my parents, as the house we were going to rent from Palmer’s fell through; Arthur worked for Palmer’s at the time. Then we went to live with Arthur’s parents as his Mum was ill. We moved to Hart Street in Brentwood in the early 50’s, that house was also owned by Palmer’s. Arthur later went to work for the Post Office.