You are here: HomenextTopicsnextPeoplenextGrowing up in Billericay

Growing up in Billericay 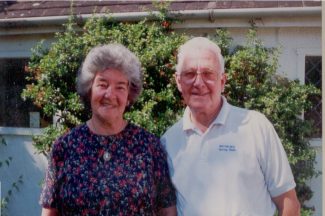 I’ve lived here all my life, my father was the blacksmith, Tom Carpenter, in Little Burstead. My great grandfather, Thomas Daniels, was champion ploughman in Billericay in 1903, his grave is in Little Burstead Churchyard  and the presentation dinner was in the Sun public house. His birthday was the same as our daughter – and yes he could neither read nor write. He and his wife Emma died in 1924 and my parents married in 1925 and had their feather bed.  And my grandfather on the other side of the family, my mother’s parents, were the tenant farmers at Snails Hall and the Billericay Zeppelin came down on 23rd September 1916. And seven years ago we were in the Middle Wallop airfield, just south of Andover, at the museum part of this airfield, and there was a photograph and a single line write up about the Billericay Zeppelin and a photograph of Sub-Lieutenant Lowry and I managed to get a hold of someone there and told him of my knowledge of this incident and I wrote it out and it is now with this photograph.

We went to Little Burstead School when there were two classrooms, the big ones and the little ones, and we had warmed milk around the fire. The milk used to freeze in the bottles and the tops used to come out, which were cardboard. I have never drunk warmed milk since.

There was Miss Storer, who was about 18, who was the infant’s teacher and Miss Williams who was the senior teacher, well the older one’s teacher (between seven and eleven). And she seemed so tall for me because she had a hand knitted jumper & skirt and the skirt went down to the floor and I’m afraid her nickname was Miss Willybobs.  There is a pond quite close by and we used to skate on that when we were children, sliding along doing what we called ‘little men’. How we knew the pond was safe I have no idea but in the early 1960’s my father and I and my cousin. Bob Carpenter, were in Great Burstead church looking up family records  and when the record books were there, they are in County Records now, and we traced our family names  of the Daniels and the Carpenters back to the 1600’s.

The senior school. Billericay School had nine classrooms round it and we were not allowed in the quadrangle in the middle. Mr. P G White was the head teacher, Sybil Bartlett was one of the teachers and I’m afraid she wasn’t particularly pleasant to the majority of the pupils, and you couldn’t answer back, no way could you answer back. But this school now has, well it must be a good 25 to 30 classrooms round it and I suppose it was about 25 years ago there was a Roman dig there. We were taught cookery; a Mrs. Strong was one teacher and was then followed by another lady whose name I cannot remember. And I left there in 1947 and went to Clarks College in Romford and then I worked in County Hall in Chelmsford and I also was a local telephonist at Billericay and Brentwood Exchange and at quarter to eight on Guy Fawkes day 19 – gosh 1951 – I walked into Brentwood Telephone Exchange, which said Telephone Exchange over the door, and I subsequently married the engineer who took me up to the switch-room.

From an interview by Sylvia Kent