You are here: HomenextTopicsnextPeoplenextSouth Green Memories

Growing up in Hickstars Lane

Our family lived in Hickstars Lane from 1949 – 1963. The road was situated on the southern fringe of the new South Green Council Estate. In the early days our houses faced open fields, but that rural environment was soon to change. Only 4 or 5 families in the road owned cars in the 1950’s and our first one was a 1934 Morris 10/4, reg. AMV 829. 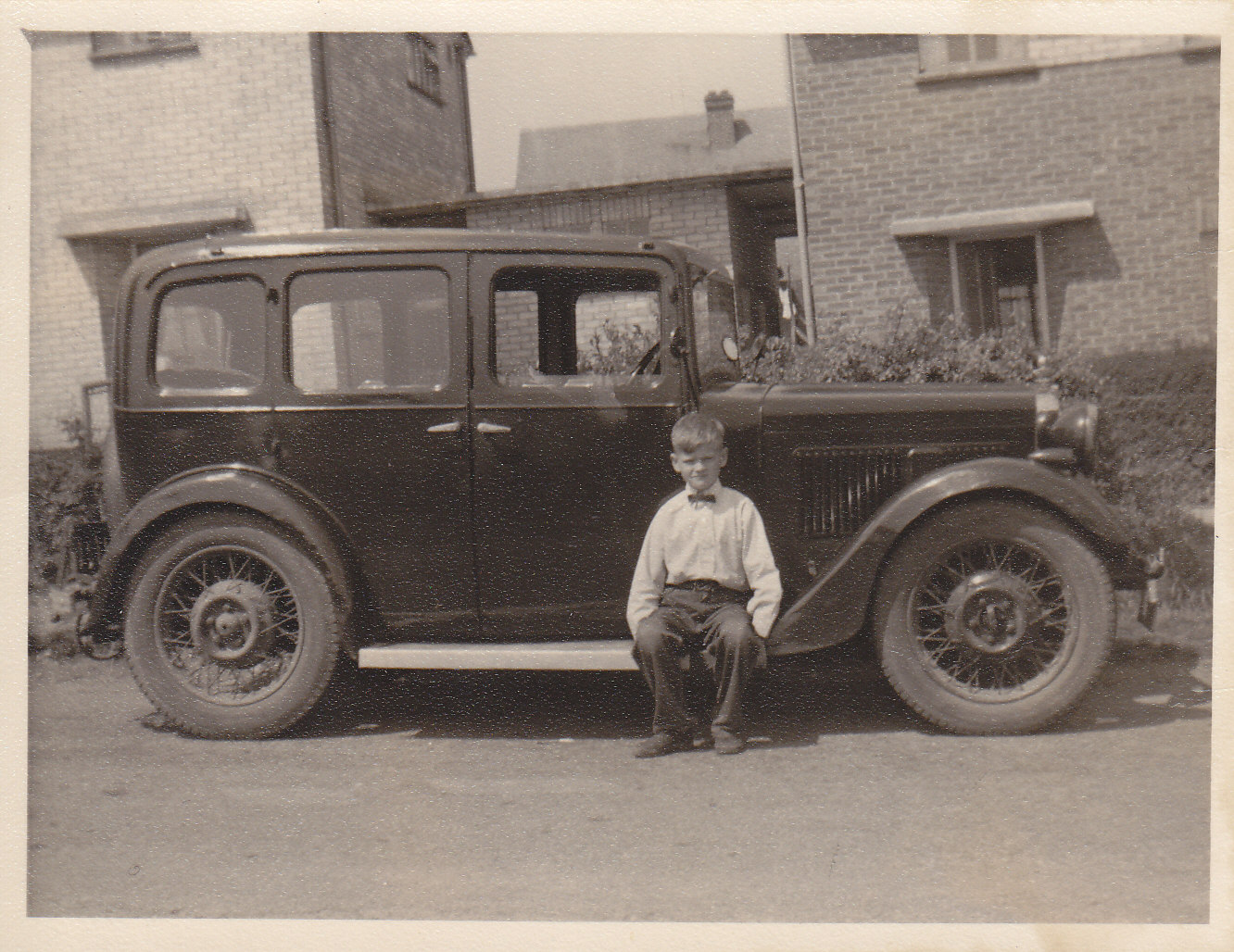 The photo shows me in my Sunday best sitting on the running board while it was parked outside our house. I can still remember the names of most of the families who lived in Hickstars Lane. The parents will no longer be alive but the (now grown up) children will be either my age or younger. I wonder where they all are now. Mr Young lived at no.6 and he owned a left hand drive American Buick. He started up his own coal merchant business using a couple of repainted ex army lorries which were parked at the rear of Walden’s garage in Southend Road. Mr Martin lived at the top end of the road and he was a teacher at Billericay School.

The path outside our houses had quite a steep slope and I used to go careering down it on my home made go-cart. My older brother, Robin, had a Lambretta scooter which he parked in our front garden. All the rear gardens had chain link fences, so there wasn’t much privacy. But in those days, we didn’t sit out in our gardens and use them for leisure purposes like we do today. In 1961, I must confess to blowing up an abandoned car left on some waste land opposite our house. The loud explosion caused neighbours to come running out thinking a bomb had gone off, cap guns and empty fuel tanks don’t mix. The stupid things some 13 year olds do! My dad rushed me to hospital for a check up but I didn’t suffer any after effects. I think the car was a write off!

I’m not sure of the date but I witnessed the aftermath of 2 buses colliding on the bend at the bottom of Hickstars Lane. Some passengers were shaken up and given cups of tea by a lady who lived in one of the cottages along the unmade road opposite. The end detached property had a lifeboat parked outside it for many years. Perhaps the skipper lost his way! The bend in the road was straightened out after we had moved from Hickstars Lane to Chantry Way.

We couldn’t afford many luxuries in those days. It was a momentous occasion when we acquired our first (second hand) fridge and had a Cyril Lord fitted carpet laid in the living room. Our houses, although fairly new, didn’t have central heating or double glazing. During the winter, I had to warm my clothes on a paraffin heater before putting them on in the morning. I then went out early to start a paper round from Weedon’s between 1961 and 1964. My remuneration was 13/- (65p) per week and I delivered papers up Highfield Road (when it was just a dirt track and a footpath), along Southend Road to the King’s Head P.H. and then the full length of Mill Road. The hard winter of 1963 tested my resolve, but the papers got delivered to everyone every day.

Many happy hours were spent playing in South Green recreation ground. I don’t know if the shelter was originally an air raid shelter or not, but it incorporated toilets at the rear – the condition of which left a lot to be desired. Our dog, Rover, followed me into the gents once and cocked his leg against the urinal – much to the amusement of the other occupant! One day, some rascal scrawled candle wax on the surface of the slide. The next unsuspecting youngster got more than he bargained for and went flying off the end landing on his bottom.

Terry sitting on his tricycle by the swings c.1953

I attended South Green Chapel in Outwood Common Road in the 1950’s. Mr Hewitt was the Sunday School teacher and by coincidence he was my R.E. ‘O’ level teacher at Billericay School in 1963/64. On Wednesday evenings, mum attended whist drives at South Green Memorial Hall. Sometimes I went too and helped make tea for the card players. It was probably a welcome change from staying in and watching black & white T.V. on a grainy 12” screen.

My father, George, was a toolmaker and rode a BSA ‘winged wheel’ (a motorised bicycle) to work at Rotary Hoes in West Horndon. My mum, Evelyn nee Cullis, worked part time in various shops in the High Street and also Gatleys general store and butchers, now converted to a residential property, adjacent to Gt. Burstead Church. Another shop, Fennell’s, later called Grange Stores, was situated by the junction at the bottom of Church Street. Before it was converted into a private dwelling, it was the scene of an armed robbery. The gunmen were soon apprehended and after a trial, they were sentenced to 7 years imprisonment by Judge Brian Watling Q.C. at Chelmsford Crown Court. I sat on the jury that convicted them.

The engineering factory, A. A. Cullis & Co, which was situated on the bend halfway between the King’s Head P.H. and Barleylands, was owned by my great uncle. Several members of my family worked there during the war years and they lived in the end semi-detached property opposite. My grandfather edited the Works and Club Magazine which was issued to all the employees. I have the first edition dated November 1937.

During the 1950’s, a friend and I used to play in the chicken farm attached to No. 1 Elm Cottages, Coxes Farm Road. The property was occupied by an elderly and slightly eccentric gentleman called Mr Shepherd. He lived, ate and slept in the front room of the house and there was an outside toilet at the rear. Mr Shepherd could be seen on his bike with a wicker basket hanging from his handlebars, delivering fresh eggs to local customers.

One sad event which had a long lasting effect on me was the death of a school friend in the mid 50’s. His name was Stephen Norris, aged 8 or 9 and he lived in Langham Crescent, No. 6 I think. Although my mother must have shielded me from all the publicity, I believe he died in a road accident while riding his bike down Bell Hill. I saw his father carrying the small white coffin and I remember where he is buried, in an unmarked grave, in Gt. Burstead churchyard.

There are many family connections with Gt. Burstead church and several relatives are interred in the old cemetery.  My parents were married in the church in 1938, followed by me in 1972. Reverend Holley conducted our wedding service and he was also present (in a wheelchair) when my wife was ordained at Chelmsford Cathedral in 1999.

There are more memories of South Green here