You are here: HomenextTopicsnextPeoplenextHow I became Town Crier

How I became Town Crier 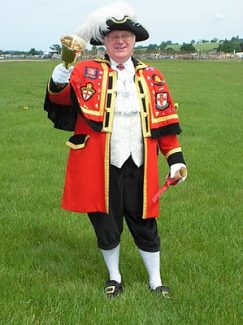 I became the Town Crier in 2001 – the Rotary Club of Billericay Mayflower were having a Fun Day, it was the 30th June if I remember correctly and what happened was they asked someone else – a friend of mine Roy Wren, a well know character in Billericay, if he would do it and he said no but I know a man who will or something along those lines. They asked me and I said ‘Yes, I’d love to do it but I haven’t got a costume’ and they said ‘Don’t worry go and hire one’.  I looked all around and couldn’t find anything, anywhere and what I ended up doing was becoming the Challenge of the Day for BBC Essex and they sourced a Town Crier’s costume for me.  It was only going to be a one off but somehow or other I turned it into something.

That year I did two more events – I did the Mothers Union, it was the 125th anniversary and there was a silver casket going around with a scroll from the Queen. There was a guy on a penny farthing and I led him through the High Street to St Mary Magdalen Church.  I don’t know whether I should have done but I opened up the casket and got the scroll out  and read out this scroll over the traffic.

Then I did the Christmas event for Rotary, they obviously like me, I don’t know why, and its gone on from there.  Since then I’ve done probably, just about 180 jobs altogether. It started off with just local stuff with the Rotary and other small organisations and today I have added it into my business because about 5 or 6 years ago my role finished at work and I then started Toast Mastering, Town Crying and Beadle work so it has all changed.

In 2009 I was appointed as Ward Beadle for the Alderman of Billingsgate and as part of that we do eight jobs which are ceremonial today. We actually go back to the 11th Century where we were the first law enforcement but today it is ceremonial.   I did two jobs only last weekend on Friday 12th and Saturday 13th November where I was in the Lord Mayor’s Show, The Lord Mayor’s Parade where he goes to the Royal Courts of justice to swear allegiance to the Queen; and that’s a wonderful privilege and pleasure and great fun to be part of especially this year as it didn’t rain so it was fantastic.

I’ve been given the pleasure and privilege to be at the launch of the Billericay Community Archive, what a wonderful thing to have all of these great memories of Billericay and to have them recorded for posterity. I think that’s wonderful and I shall be there in my Town Criers role outside the Library and if you don’t see me you’ll hear me.  I’ll be ringing that bell.  The bell’s an interesting thing. The bell was actually made in the Whitechapel Bell Foundry it was given to me by my Uncle in memory of my Auntie who died at the age of 90 and so again it’s a wonderful thing, the history. It may not directly be Billericay’s history but I follow in a line of Town Criers in Billericay with Mr Gentry and also Arthur Bartram. Their bell can be found in the Cater Museum – I helped to celebrate the 50th anniversary of the Cater Museum earlier this year.