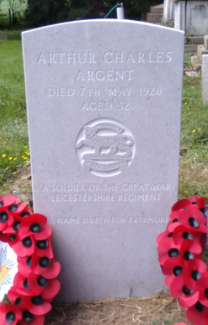 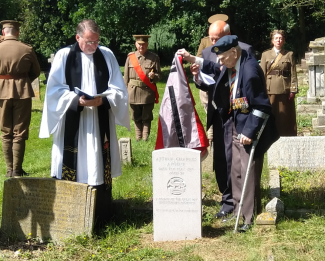 Buried in the churchyard of St. Mary the Virgin, Little Burstead on 11th May 1920 after a funeral conducted by Rev. Clement Payne, Rector of Little Burstead and Rev. W S Smith, Vicar of Billericay.

For some time although his name was on the Billericay War Memorial he was unidentified as he is not recorded on the Commonwealth War Graves Commission website. It was thought that Private William Charles Argent was the soldier commemorated on the memorial. However investigative work carried out by Karen Dennis of the Western Front Association found that Arthur Charles Argent was the individual commemorated and that he was buried in an unmarked grave. She organised contributions towards the cost of a new headstone in the style of CWGC headstones and a Service of Commemoration and Dedication of the Headstone was held at the church on 22nd June 2019