You are here: HomenextTopicsnextPlacesnextStreetsnextLiving on the East Side

Living on the East Side

Memories of living in Saffron Walk
By Pat Heinson 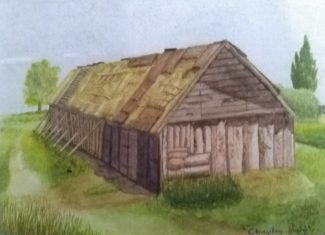 We came to live in Saffron Walk in 1959 and we have seen many changes in and around the town. When we were looking for a house Hillside Road was unmade and there were bollards at the junction with Valley Road. To the east of Valley Rd there was farm land mainly planted with wheat and at the end of the road was a small field with pigs. Beyond the fields was Sunnymede, an estate of bungalows and beyond these the Walthamstow estate (which is now known as the Outward Common Estate) was being pegged out for houses.

The houses in Chantry Way were built in three distinct phases. Those at the bottom of the hill were erected by the Co-operative Society and they are now administered by a housing trust. Next is the Chantry Estate with Chantry Way, Saffron Walk and Weavers Close. They are Semi-detached houses built in 1956. Chantry Way stopped at a small market garden and access to the High Street was along a concrete footpath laid for residents of the Co-operative Society houses, to the right of the market garden through the blackberry bushes. This path passed in front of two bungalows, more of which later. Chantry Chase at the top was unmade and large puddles developed in bad weather. When the market garden closed the road was extended but not quite to Chantry Chase, although the pavement did continue on the south side to the top of the hill. Finally the third phase of housing was built on the south side of the pavement in 1982/1983.
Between the houses in Chantry Way and Crown Road was an area of scrub land and this was cleared for the Cloisters Estate. Access was by a spur from Chantry Way. Soil levels were changed for the road.

Of the two bungalows beside the footpath the one at the top was demolished and the Senior Citizen’s Day Centre erected. The lower bungalow, named High View, did not become vacant until about 2012 when it was allowed to fall into disrepair. Later it was demolished and a row of 5 terraced houses was built. Those who walked up the footpath will remember the magnificent Dahlias grown in front of High View.

On the left hand side of Chantry Chase, behind the Chequers Public House, stood two old barns. One was built of vertical tree trunks (see the drawing by Harry Richman) this collapsed in a storm one night. Behind the fishshop, Goodspeeds, (now re-named and converted into a restaurant), was a shed which was called “The Smoke Hole” for curing fresh haddock from Smithfield Market. Chantry Chase is now tarmacked and many changes on either side of the road are still taking shape.

At the junction with the High Street there was only a footpath in front of the Chequers, no bollards or lamp posts and no bollards in front of the War Memorial and in this area the bus from Norsey Road would turn before traveling to Chelmsford via Stock and Galleywood. The fare for a five day return ticket was 10 shillings.

We can remember a lot of events in the town. The fetes at Sun Corner run by Mr Rosier for the St. Andrews Hospital League of Friends, the Carnival Parades down the High Street led Mr Leyland on his penny farthing bicycle and Billericay Town Football Team on an open top bus after they had won the FA Vase Cup.

Where Emmanuel Church now stands in Laindon Road was the Archer Hall. Here we went to Pantomimes and performances by the local Operatic Society. When Billericay was a constituency which returned its own Member of Parliament, the count was held in the Archer Hall and Billericay was proud to be the first to announce its results. The town was a marginal seat and several prominent party dignitaries including Lord Hailsham, Clement Atlee, Harold Wilson and Shirley Williams all came to speak in different halls.

When the Billericay Arts Association was formed by Madeline Worral, a professional actress who lived in the town, its building, known as The Fold, was in a car park behind Foxcroft, (a large house on the East Side of the High Street). My husband and I helped at coffee mornings there on Saturdays and we often went to see the films which were hired and projected onto a large screen in the performance room. When Waitrose the supermarket needed the land for its car park the BAA moved the Fold to part of the old empty Quilters Board School in Laindon Rd.
We knew the Ritz Cinema in Chapel St, St Andrews Hospital with its Maternity Wing in Norsey Rd and the fund raising to help to build the Burns Unit near St Andrews.