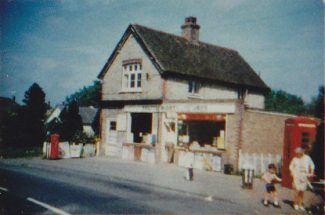 Used to live just off Perry Street, as kids.

Opposite the station, where the petrol station / shops are now, used to be a “farm house” , very derelict in the early 60’s. We used to play there. A part that still scares me now, was the large concrete block with small slits in it. It always stank , but was great t play cowboys and Indians in. Looking back now, I’m guessing it was a concrete pillar box, part of the railway stop line defences.

I remember the station being upgraded. As the stairs were out of action, a large scaffolding stair case was built, no health and safety on those days; as a lad I remember father taking us to London by train and it was raining and those great big steps being very slippery, feeling like a stairway to heaven.

Lake meadows was a great place for kids, lots of long grass, a real castle at one end of the lake (I now realise it was a folly) fishing for that ever present giant fish, that everyone seemed to have seen but never landed. I remember the lake being drained, and great big earth scrapers rumbling up and down the now drained lake. Then a great big pipe being put in, and the over flow, the pipe going down Attridge Close.

On the way home from Buttsbury School, Shuttleworth’s was the halfway store to drop into to get your 1d of sweets, in a little paper bag. Just up from it, opened later a Spar “supermarket” well it was big for the time. When queens park came along to demolish the woods, Shuttleworth’s was replaced by a roundabout. I guess the old family business had less clout than the Spar shop,

Queens Park was a monster. as kids the woods went from Shuttleworth’s all the way down to Mountnessing Road. Somewhere in the middle of it, or so it felt at the time, lived the Mr and Mrs Goddy and their children.

In the summer we used to cycle down to the ford on Mountnessing Road, and occasionally cycle up the massive hill past the church , into Ingatestone. There having a fizzy drink from a bottle. The metal lids, used to have a cork lining/seal, which you could peel off, and then use to hold the bottle top onto your shirt like a badge. If you fell of your bike, those bottle tops used to really dig in ..

The other great thing to do , was to sit on the humped back bridge down there, and “direct traffic”. Most people used to do as we said, and come when we waved them on, or stopped when we said. Some didn’t and more often they would end up nose to nose on the bridge.. Ah the confidence of youth.

From the ford, all you could see was fields and Queens Park woods running up the hill. At some point , a big pipe line was laid down near the ford, some sort of pumping station being built near by.

Buttsbury School was my place. Started at what is now just infants, but was all ages as I started. Later years, we were moved into “de-mountables”. These were wooden boxes, the great thing was the oil heater at the back of the class room; it used to make a great roar as it started up. A great big block, seemed about the size of our living room at home, it had a metal fence around it, health and safety even then, the fence being about our height. We used to balance our plasticine on top of that fence in the winter to warm it up enough to play with, Yes every now and them a lump would fall behind the fence into the no mans land, I can remember making a getter thing, a lump of plasticine with a string rolled into it, such that if you really warmed up that plasticine, you could drop it over the fence, land on top if the lost piece, and thus pull back both pieces. I can remember getting my first non family kiss for the bit of work.

When I was in Juniors , KS3 I’d say now, the new school was built and us oldens moved over to the the new school. I can remember us walking over as what I’d now call a school walking bus, each of us carrying our pencils and our chair.

And despite everything, we still made it to old age.