You are here: HomenextTopicsnextPlacesnextStreetsnextBarn Lodge 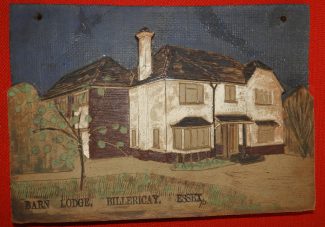 My parents Alan Rutherford Ritchie and Sheila Margaret Ritchie purchased Barn Lodge on the junction of Stock Road and Hillhouse Drive in c1952 for £5000. The house had very large gardens which extended some way along both roads. I believe they added a rear extension in c 1957-9. There were five children in the family, Lorna Ritchie 1954, Peter Ritchie 1956, Susan Ritchie 1957, Catherine Ritchie 1959 and then Elizabeth in 1967, so I suppose you can see that we needed the extension.

Some time in the late 50s a plot was sold at the end of the garden (down Hillhouse Road) to Ninon and Peter, one of whom was some distant relative.

Later the Council compulsorily purchased the end of the garden to gain access to “The Spinney” estate.

The house was sold in 1982 for I think £185,000 to, I believe Strutt and Parker. The land was then compulsorily purchased by Basildon Council for around £325,000 about 18 months later and subsequently Hillhouse Court was built

My father was a great racket player and once beat Johnny Leach (world champion ) at Table Tennis and was men’s champion at Gidea park Tennis Club many times. We had firstly a lawn and then a “tarmac” tennis court and it was here that John Lloyd first wielded a tennis racket.

If you look you can still see the dropped kerb near the pedestrian crossing in Stock Road where the entrance to our drive was and there also remains  a dropped kerb in Hillhouse Drive where the drive came out.