Nestled at the northern end of Billericay High Street at the junction of Norsey Road, is a delightful double fronted building named Elizabeth Cottage. It was built in 1903 as a family home. It is now one of the few remaining residential buildings in the town centre Conservation Area. The building is not listed but is has historical local interest. The site on which it stands has a long and interesting history but the current house has been beset with controversy in recent years. Originally there was a large barn in the back garden with a brick built wash house adjoining. Toilets for the house were in the far corner of the barn! It is recorded that the McKenzie family lived there from about 1912 to 1922.

I have a personal family connection with the house because my grandparents were evacuated there for a short while during WW2 when their home was bomb damaged. They previously lived half way between the King’s Head PH and Barleylands immediately opposite the engineering factory, AA Cullis & Co. which was owned by my mother’s Uncle Bert. The owner of Elizabeth Cottage at that time was Mr William Rich, an Inland Revenue tax clerk, and his wife Adelaide Rich, listed as “unpaid domestic duties” in the Electoral Register! After he left, the house was occupied by the Barnes family and I used to play in the back garden with young David Barnes, a school friend in the 1950s. They emigrated to Australia in c.1958. Since the 1970’s it has been unoccupied and fell into disrepair. 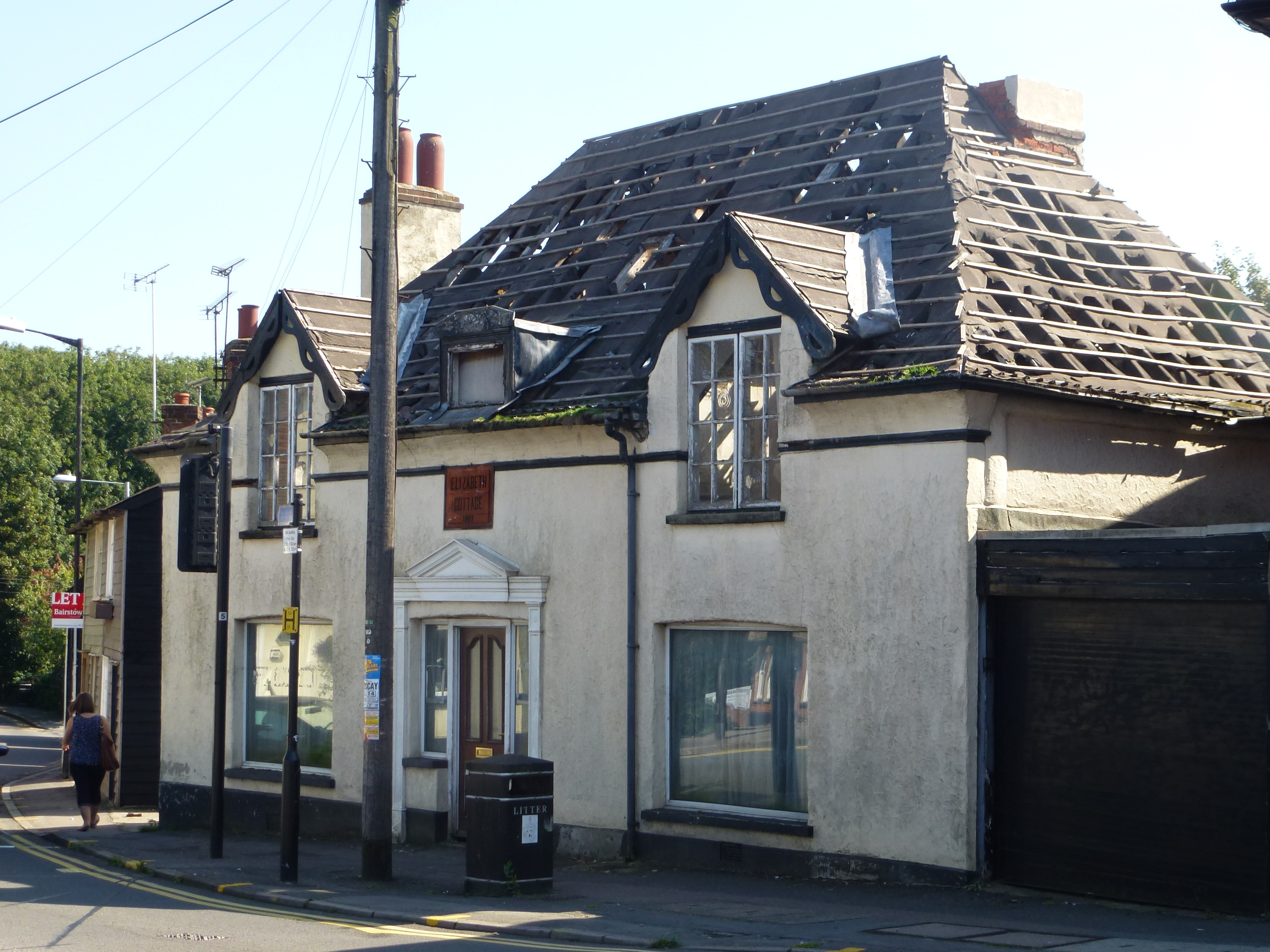 The history of the site can be traced back to 1695 and became a meeting place and burial ground for the Quakers, (now referred to as ‘Friends’). Records show that “in 1704. Ricard Denscy of Felsted, formerly of Great Burstead made over the property to Trustees in consideration of the sum of 5 shillings for the first year and afterwards the rent of one pepper corne if it be lawfully demanded”. The freehold property is described as including an outhouse, yard, garden and orchard. It was believed to have belonged to a John Cole and had been rebuilt in brick so that it could be used as a meeting house. The Quakers stayed there from 1704 until about 1715 when they found new premises in Great Burstead. The period after that is unclear but it is recorded that in 1848, the chapel being dilapidated, the land was sold and became ‘The Royal Oak Beerhouse’ Although hard evidence eludes me, I have been told that skeletal remains from the burial ground in the back garden were exhumed at a date unknown and re-interred at a cemetery in Chapel Street.

Since 1996, the Land Registry indicates that the house has been owned by 2 individuals, Ricardo Bucheli, a banker, and Mikiko Bucheli, a lawyer. They both lived in America and bought the house as a ‘development potential’, but it laid dormant and remained empty for many years afterwards. In 2011 these owners were granted planning permission to convert the building into a shop with flats over, but the work was never carried out and permission, which was only granted on appeal, expired in 2014. Later that year, some unknown workmen started stripping the roof tiles off and demolished a chimney.

This wanton vandalism caused much consternation. Basildon Council were informed by the Billericay Society and an injunction was served to stop the work immediately. The workmen disappeared and were never seen again. After much pressure from the Billericay Society, Basildon Council took control of the property and covered the exposed roof timbers with tarpaulin to keep it weatherproof and prevent further deterioration. This together with additional emergency measures to make it safe, surveyor’s reports etc the Council incurred an expenditure of £28,860. After 2 years of failed attempts to contact the owners an application was made to the Land Registry to place a charge on the property for that amount. During this period, there was much frantic activity between Members and Officers in Basildon Council and the Billericay Society all of which generated copious articles in the local press.

In 2017, the house was put up for auction in London and a local developer, Messrs Dawson Developments paid £356,000, more than £75,000 above the reserve price for it. Later that year they submitted a planning application to Basildon Council for the construction of a rear extension and conversion of the interior to 6 two beds apartments on the ground and first floors and a 1 one bed apartment in the attic. This was initially refused permission but later allowed on appeal. The plans are in the public domain and can be viewed on the Council’s planning website, ref: 17/00477/FULL. In 2018, work began slowly on the conversion but it came to halt in 2020 due to the Coronavirus lockdown. 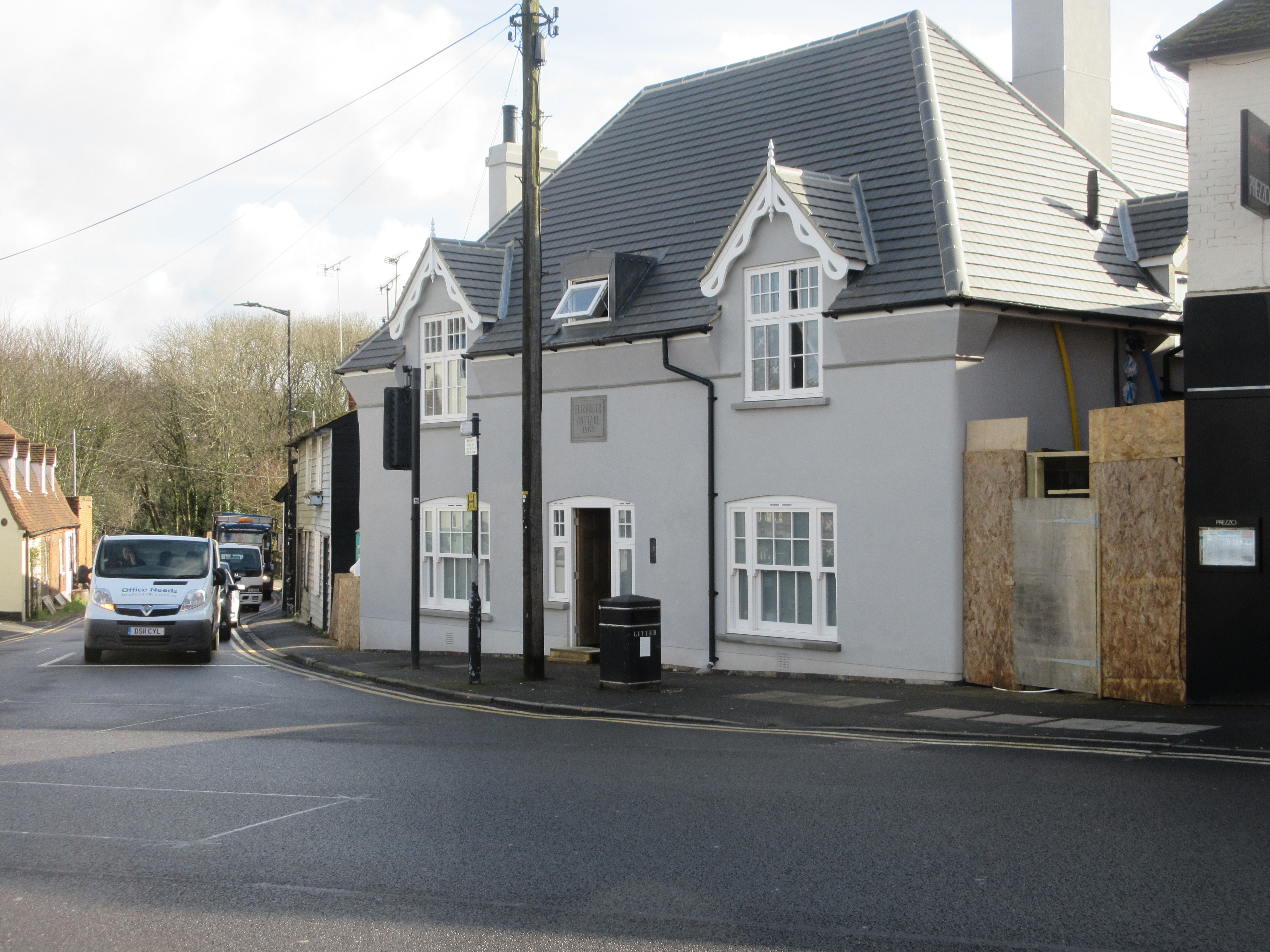 One day when the front door was open, I ventured inside and the workman kindly showed me round after I explained to him why I had a family interest in the house. I was naturally pleased to see that the original façade of the building was being preserved and restored. The conclusion of all this bureaucratic controversy is that the money earnt from the sale of the house minus the Charge put on it has been deposited into a Trust for 12 years for the owners to come forward and claim it. Failure to do so will result in the remaining balance being diverted to Basildon Council’s coffers. A win win situation all round!