Origin of the Mayflower 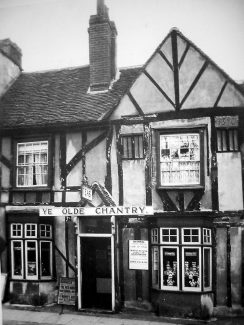 Most people know that Billericay is steeped in national history for many reasons. One in particular, is the existence still of the Chantry building at numbers 57-61 High Street. The premises were originally one house and were probably built on the site of the Chantry priest’s house in 1510.

One time resident, the late Fred Fulcher took many photographs of the Chantry House during the 1960s and ‘70s and was always happy to talk about this building and others, some of which were demolished over the last 30 years.

Fred recollected: “I remember this old house when I was growing up. When I was very young there was an almighty row when the local paper reported that the old Chantry was to be sold, taken apart and shipped off to America. We always had tourists coming to take a look at it as it was supposed to have been the home of the famous Christopher Martin who took on the job of victualler on board the Mayflower that took the Pilgrim Fathers to America in 1620. It is said that they met there the night before the ship sailed. Six people were thought to have come from Great Burstead including Christopher Martin’s wife, wife Marie, step-son Solomon and servant John Langemore embarked with Peter Browne, Richard Britteridge, two other emigrants, who lived in neighbouring Little Burstead.”

In later years, several roads in Billericay were named in memory of these historical characters.

Today the date shown on the building is 1501, but as can be seen from the attached photograph (and many more in our archive) the date should read 1510.