Research into the Mary Magdalen site
By David C Rayment 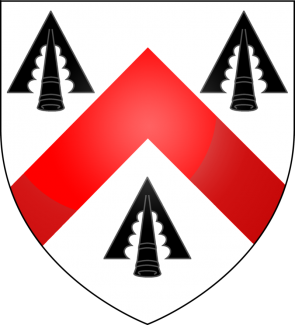 zoom
Coat of Arms of the Sulyards of Flemings near Runwell

In various writings there appears to be some confusion over the founding of a chapel at the market town of Billericay, a Hamlet of Great Burstead, and which predated the present church in the High Street dedicated to St Mary Magdalen. It is hoped the following will go some way in clarifying the situation.

The historian Richard Newcourt, in volume 2 of his Repertorium & Ecclesiastical Parochial History of the Diocese of London writes; “….there was a Chantry, now a Chappel, founded near up on 200 years since, as is supposed, to the Honour of S. Mary Magdalen by the Family of the Sulyards of Flemings in the parish of Runwell….” In other words, the chantry had not existed for 200 years at the time of Newcourt’s writings (1710), but close to it, implying a build date shortly after 1510. The Fleming family at Runwell, who held the manor of Flemings, also held the advowson of the church there from at least 1324 to 1492 after which the advowson was transferred to the Sulyards. The Sulyards, however, were in Runwell before the hand-over. Interestingly, Edward Sulyard, who first married Marabel Copdow, a cousin and heiress of Sir Thomas Fleming, died in 1516. It is therefore possible (and I speculate here) that the Chantry was founded by the Sulyard family in memory of Edward. Certainly, the year of Edward’s death is within Newcourt’s “near up on 200 years”. Incidentally, in his will Edward Sulyard bequeathed the advowson of the church at Runwell to his widow, Margaret, who later married William Ayloffe.

Newcourt, however, interestingly refers to a Chantry in Billericay at the time of the Dissolution but further states the Chantry or Chapel was sold by King Edward IV to a Mr Tyrell. Edward IV reigned from 1537 to 1553. Thus Newcourt is unclear as to whether Tyrell acquired a Chantry or Chapel. He then states Tyrell kept the lands belonging to the Chapel but sold the Chapel itself to the inhabitants of the town of Billericay, and from there on Newcourt’s writings refer to a Chapel not a Chantry. The Chapel was managed on behalf of the inhabitants of Billericay by a group of trustees. The trustees, however, became concerned that the Chapel may not have been consecrated, and that being some distance from the parish church at Great Burstead they would like to have the lawful authority to hold the administering of sacraments on the premises should the need arise. The trustees therefore petitioned the Bishop and on 30 August 1693 the trustees, “surrendered, resigned and delivered up all their property in the Chappel”. On Sunday October 8 the same year, Henry Compton (1632-1713), a son of the 2nd Earl of Northampton and the Bishop of London from 1675 to 1713, oversaw the consecration of the Chapel. Richard Newcourt was at the ceremony in his then official capacity of “Notary-Publik and Deputy Registrar”, so had experience of the place, albeit, some near 200 years after it was founded.

During the consecration ceremony the Bishop dedicated the Chapel to St Mary Magdalen “as it was when a Chantry and decreed it to be called the Chappel of S. Mary Magdalen, within Billericay, endowing it with all the usual Privileges belonging to ancient Chappels”. The text perhaps therefore implies the site of the chapel was ancient even though it was said to be founded c1500.

The existence of an ancient Chapel at Billericay is, however, evidenced by a document held at the National Archives, UK, which refers to a settlement by Gilbert Foliot in respect of a chapel at Botenecca in Burgested. Gilbert Foliot was the Bishop of London from 1163-1187. A copy of what appears to be the same document may be viewed on-line at the University of Toronto Libraries. It is in Latin (Charter Document 03180089). The University of Toronto Libraries has assigned it a date of 1175-1181. Thus a Chapel at Billericay existed before this period.

The document, if my interpretation is correct, concerns a dispute between Ralph de Altaripa, the master of the schools of London and G of St Auden over the Chapel of Botenecca which Radulf says relates to his church at Burstead. The parish church of Great Burstead was at one time under the auspices of the Abbey of Stratford Langthorn which was founded in 1135.

The name of Botenecca therefore predates the sometimes referred to Beleuca as being the oldest variant of Billericay and as far as I am aware the above mentioned settlement is the oldest document which refers directly to Billericay. It does not appear to have been mentioned in any historical writings about the town previous to this article so has been missed by historians, although I stand to be corrected on that point if need be.

In conclusion, Richard Newcourt was the Procter General of the Court of Arches and the principle registrar for the Diocese of London, having access to ecclesiastical documents. He clearly believed the Sulyards who resided at Flemings in Runwell had founded some sort of religious building at Billericay which probably once stood on the site of where St Mary Magdalen now stands in the High Street. I have no reason to doubt this.

However, documentary evidence shows there was previously a chapel in Billericay which dates from at least the late twelfth century of which little is known. That Chapel may have existed on the same site as the present church and fell into disrepair, thus disuse, until the Sulyards built a new Chantry, later a Chapel; or perhaps the old Chapel was sited elsewhere in the town.