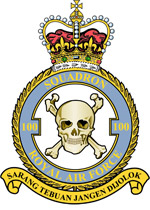 He is buried in the churchyard at St, Mary Magdelene, Great Burstead.
The inscription on his headstone reads “Killed on War Operations “Till We Meet Again””

Sgt. Wall was a Flight Engineer based at RAF Waltham, near Grimsby, Lincolnshire in the newly reformed 100 Squadron. 100 Squadron had originally been a Torpedo Bomber squadron equipped with Vilderbeest biplane torpedo bombers operating in the Far East,; the squadron was wiped out within days of Japan entering the war.
On 15th December the Squadron was reformed as part of Bomber Command equipped with Lancaster Bombers at RAF Waltham and entered a period of working up.
On 15th February 1943 Lancaster III serial number ED540 crashed at 13.08 and caught fire whilst attempting a missed approach at Waltham airfield . The aircraft had a crew of seven on board of whom five were killed including Sgt. Wall, the other two crew members are listed as being injured.
100 Squadron did not become operational until 4th March 1943.