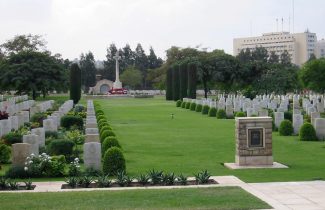 Buried at Heliopolis War Cemetery, Cairo, Egypt
The inscription on his headstone reads: “Splendid you passed, tranquil you lie. A beautiful memory left behind”

We know that Jim Marcham was made a 2nd Lieutenant on 16th July 1940 as a member of the Intelligence Corps. He was obviously promoted later in the war but the London Gazette does not appear to have a record of this. We have no information as to how he was awarded and MBE but the CWGC website attributes this honour to him.