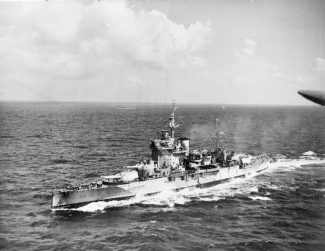 Son of Edward Rupert and Dorothy May Evans of Billericay.

In 15th September 1943 H.M.S. Warspite arrived at Salerno Bay in Italy where her task was to bombard enemy positions. On the morning of the 16th she resumed bombardment targeting a German ammunition dump behind Altavilla managing to hit the target directly a large number of times. During mid morning she came under heavy air attack bit because of her mission and the concentration of other ships she was unable to take standard avoiding action. At 14.00 whilst she was moving awy from her bombardment position, having completed her mission, she was attacked by 12 FW190 fighter bombers which she managed to fight off. However  at around 14.27 the lookout sighted a group of Dornier 217 K2 bombers flying at high level; 3 fx-1400 (Fritz-X) glider bombs were released by these aircraft at the ship. Two of the bombs found their target; one bomb hit the port side penetrating six decks before exploding when it hit the double-bottom of the ship; this explosion resulted in the flooding of 4 of the 6 boiler rooms.  The second bomb was a near miss on the starboard side just off the side of the ship which caused a long underwater gash in her side. nine men including L/S Evans were killed and 14 injured.