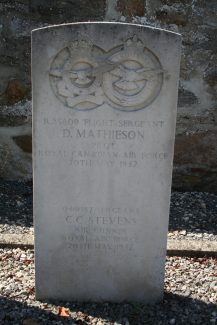 zoom
The headstone of Sgt. Stevens 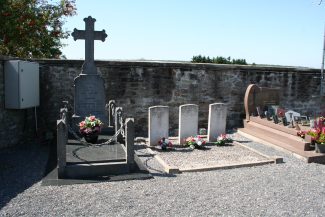 zoom
The grave of all six members of the Lancaster crew

156 Sqn. was a Pathfinder squadron based at RAF Alconbury in Cambridgeshire from February until August 1942.
Sgt. Stevens was an Air Gunner on Lancaster X3671 which took off at 22.00 on 19th May 1942 on a mission to bomb Mannheim, Germany. Nothing was heard of this aircraft after take off and thus it must have experienced radio failure, however it continued on it’s mission. The aircraft failed to return to base and the pilot of another Lancaster in the squadron, P/O Bain reported that he believed he had seen it shot down over Charleville on the outward journey. Later it was discovered that Lancaster X3671 crashed near Hargnies in the early hours near the Franco Belgian border. All six members of the crew were killed. The crew are buried together in the cemetery at Hargnies.