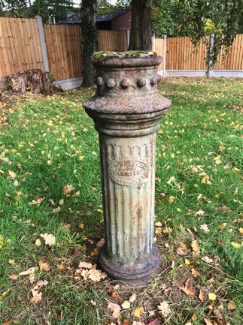 We have been told that what looks like part of an old lamp post at  the top of Church Street on the opposite side from the church, is part of an old air vent to a WW2 bunker buried underneath. Does anyone know if this is correct?

Editor: It is unlikely this is to do with a WW2 bunker as the stump appears to be Victorian made by Ham Baker & Co of Westminster. Ham Baker were manufacturers of water related equipment and piping, although they did make lamp posts. The most likely explanation for this item is that it is a sewer vent pipe and may have been above a cess pit.

It is interesting to note there was an Observer Corps lookout post about 100 yards north of here in the fields during the early post war period which is dealt with elsewhere here.

But do you know better?