You are here: HomenextTopicsnextPeoplenextFrench's FarmnextRoman Seal found on French's Farm 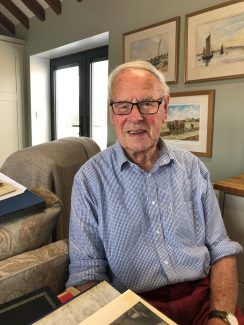 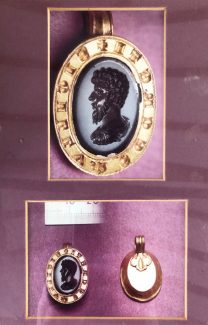 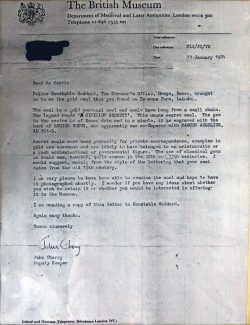 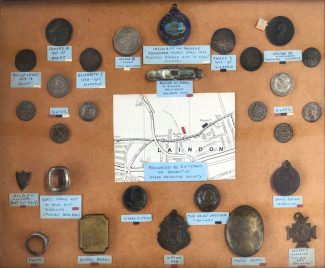 I’m looking at a seal that was found on our farm in 1983 I think it was. It has been in the field for a long, long time obviously, because the gold work was Roman and it was found by one of the metal detectors. He did all the right things, he took it to the Coroner which you are supposed to do if anything is found and it took some little time and the British Museum were very excited about it because they had nothing quite like it. So they said that they would certainly display it at all times and every three years they send and just remind us that it is on show there still, and its value. They have to value it for insurance otherwise they wouldn’t but they have to.

It’s rather exciting to think that field had been ploughed quite a few times. I think originally it had been a grass field but it had been ploughed many times in my time but it wasn’t at all damaged when it came out and the gold shone like gold it really did. Mr Terris was the man who found it so it half belongs to him and half belongs to me. We went through the right things we thought and we did.

We had an evening at the British Museum a good many years ago and they had all of the seals out on display and we had like a champagne reception. It was rather good!

It was a great joy really especially as my daughter got married soon after that and my wife wore it at her wedding on a gold chain we got, before it went up to the museum – it took some time for them to do all of the paperwork so she was able to wear it which made it rather unique.

I’ve been to see it several times it’s in room 40 under antique jewellery but well worth a visit because there are lots of other seals there. It’s not very big, it’s one of the smallest ones they’ve got but they’ve got nothing else quite like it.

Claire: You said that the detectorist who found it was working somewhere else before he came to your field?

Yes, yes he was working with a whole party of them – 7 or 8 of them used to go at weekends to Laindon Common and they were happily doing that for quite a few years and one of them dug up a shell or a bullet or something from the war and so the authorities said oh we can’t have you digging about on the Common any more so they couldn’t go there any more. So they were rather disappointed so I said to them if you want to come and do it on the farm you can. In those days metal detecting was a bit more in its infancy I suppose so for many years they came and they still come now, not very often because we tend to not have fields vacant for very long and because they can’t come once a crop is sewn or they can’t come before harvest.  So it’s all rather exciting really. But most years there are one or two who still come.

Note: French’s Farm and Bensons Farm are in Wash Road in Billericay which was classed as Laindon at the time.