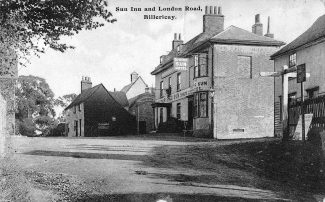 zoom
Notice the building on the extreme right of the photo. This building is where the beacon now stands. 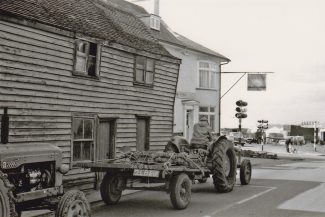 zoom
The cottages in the foreground were known as Eclipse Cottages as they were between the Sun & the Moon. The Half Moon was situated behind the photographer and the Rising Sun is shown by the traffic lights.

Before the coming of the railway the Rising Sun’s position at the crossroads of the road to London and Southend made this an ideal position to take advantage of the coaching trade and it was said to be an inn of some standing.

The pub changed hands again in 1898 and the sale catalogue described the pub as “Exceptionally well situated where all carriage and bicycle traffic must pass.”