You are here: HomenextTopicsnextPlacesnextSchoolsnextQuiltersnextQuilters Junior School Centenary Celebrations in 1978 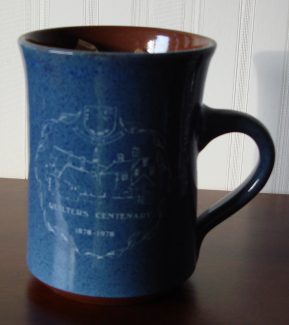 To mark the centenary of the school all pupils at Quilters took part in a historical pageant.  As I remember each class was allocated a different historical period to ‘illustrate’ during the pageant. My class at the time (4th year; Mrs Howells was, I think, our teacher – a small, pleasant, Welsh lady) learnt about period games such as the hoop and stick.  I also seem to recall all of the girls wearing smocks. The actual pageant took place in the summer on the school field.

Each pupil at the school was also given a blue commemorative mug and there was also a painting competition – everyone was given a picture of the old school building – with the bell tower (where the Ivory Rooms and the Fold are now) and we coloured it in with paints.  I do not know what the prize was or who the winner was.

I also remember that pupils from the Billericay School (Billericay secondary school as it was then generally known) created a mural on the wall of the newest school buildings; I think this may also have been for the centenary.

The Centenary celebrations took place in a year after the Queen’s Silver Jubilee in 1977, when I remember each pupil being given a white commemorative mug and a silver coin.