You are here: HomenextTopicsnextOdditiesnextThe Mayflower Symbol

Sailing for the New World
By Sylvia Kent 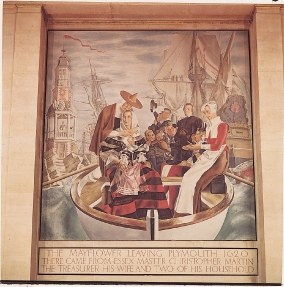 zoom
The Mayflower sails for the New World

The Mayflower symbol is well known worldwide as the ship which sailed from Plymouth in Devon with six Great Burstead residents on board. The manifest included the ship’s governor and victualler, Christopher Martin, his wife and two servants, plus two other single men.

Martin is believed to have owned properties in the town of Billericay including the Chantry House at Nos 57-61 which still stands. It was here that the historians tell us that Martin and the Essex contingent met to pray and bid farewell to their friends and families before embarking on their 66-day journey that ended when they landed at Cape Cod in America.

A child was born on the voyage.  He was christened Oceanus Hopkins, and he thrived initially, but died before his seventh birthday.  Unfortunately, all the Great Burstead emigrants died even before leaving the ship and settling into their new land.

Many Essex folk followed those first Pilgrims, including Billericay residents, Ralph Hill and his son.  Their family name appears on the Legislature to form the new town of Billerica established on 23 May 1655.  Today several buildings and organisations both here and in Billerica, carry the Mayflower name and symbol.

Our town’s connections with America continue through our Twinning Associations with Billerica in Massachusetts and Fishers, Indiana.  We offer a warm welcome to our visitors from our twin towns.