You are here: HomenextTopicsnextOdditiesnextHair Powder Tax

A way of identifying the richer areas 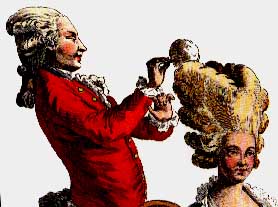 One of the minor taxes imposed on the richer members of society at the end of the 18th century was the Hair powder tax. Knowledge of who paid this tax and where they lived gives us an insight into the relative importance of certain areas.

In Billericay in 1795 there were 35 people who had a certificate to show they had paid the tax and could wear Hair Powder. Of these 18 were women and 17 were men.

In North Benfleet at the same time there was only one person licensed and that was Martha Moses.

In Bowers Gifford three people (2 women and a man) were licensed to use Hair Powder.

In Great Burstead only one man and one woman were licensed to use Hair Powder.

In Little Burstead 8 people were licensed – 5 women and 3 men.

In Ramsden Bellhouse there was only one woman

But in Ramsden Heath it was a sole man that was licensed.

No mention is made in the records of other parishes in the area (Wickford, Ramsden Crays, Pitsea, Vange, Laindon, Langdon Hills, Lee Chapel, Mountnessing, Fobbing, Dunton or Buttsbury) and so it has to be assumed that there was nobody in these areas that was rich enough to obtain a licence to use Hair Tax.  …. Or perhaps they were not that vain.

Hair powder was made from finely ground starch, scented with orange flower, lavender, or orris root, and occasionally colored blue, violet, pink or yellow, but most often white.

This data was found in an old office at Billericay library in Burstead Lodge.