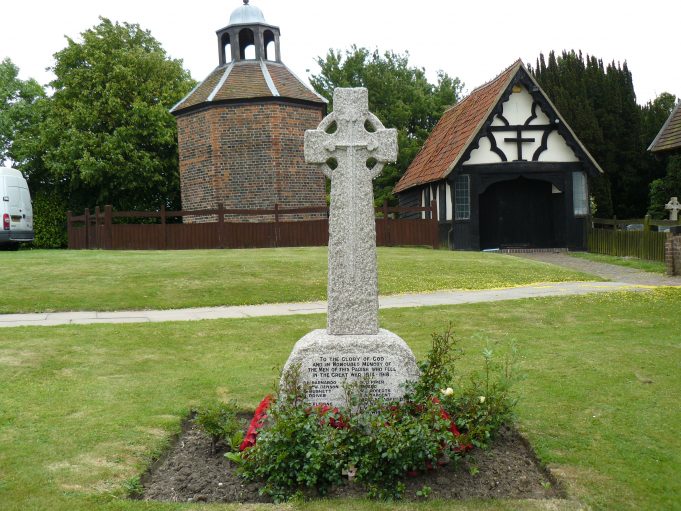 The front panel on the memorial towards the road side commemorates the fallen in the Great War 1914 – 1918. 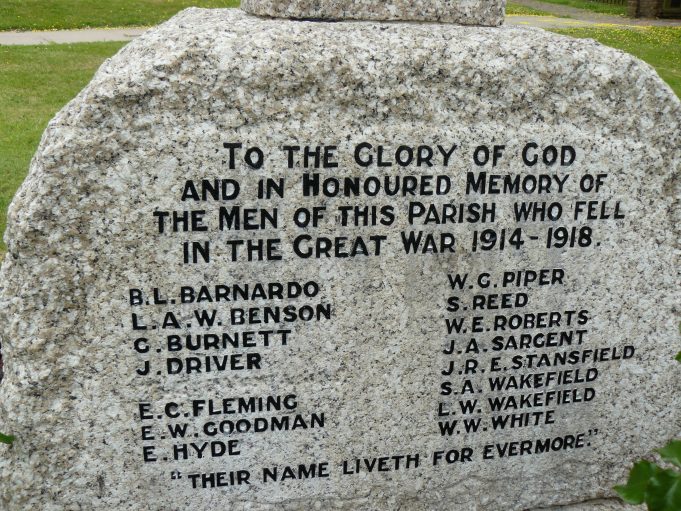 The rear panel, away from the road commemorates the fallen of World War Two 1939 – 1945 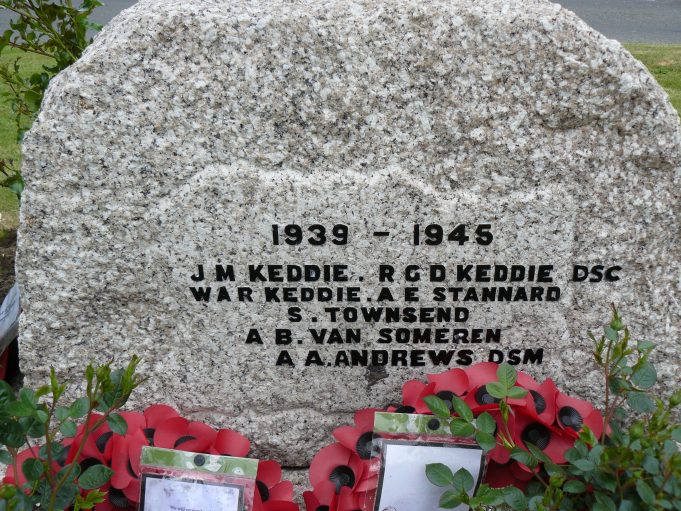 The following men are commemorated here:

Sgt. Pilot JOHN MAITLAND KEDDIE (915015) of 99Sqn. RAFVR who died on 4th January 1941 aged 19. He was the son of Frederic Wallace Keddie and Annie Emily Keddie of Downham and is buried here in the churchyard. His brothers Richard and Wallace are also commemorated here.

Lieutenant RICHARD GEORGE DAMYON KEDDIE DSC who commanded H.M.S. Cattistock, brother to John and Wallace. He died on 29th August 1944 aged 26 and is buried here in the churchyard. H.M.S. Cattistock was on patrol off Cape D’Antifer with H.M.S. Retalick when they intercepted German craft carrying out evacuation of Le Havre. H.M.S. Cattistock received 26 hits including one on bridge which killed her Captain. Lt. Keddie. See comment at foot of page.

Flight Lieutenant WALLACE ARTHUR ROBERT KEDDIE (87669) of 210 Sqn. RAFVR who died on 16th May 1942 aged 25. He was the brother of John and Richard above. He is commemorated on the Runnymead Memorial.

Lance Corporal ARTHUR EDWARD STANNARD (5834201) of 142nd (7th Bn., The Suffolk Regiment) Regiment, Royal Armoured Corps who died on 27th September 1944 aged 24. He was the son of Arthur Herbert Stannard and Louisa Stannard of Downham. He is buried at the Coriano Ridge War Cemetery near Riccione on the Adriatic coast of Italy.

S. TOWNSEND There a number of servicemen who this could be. We would be grateful of more information so we can be sure who this is.

Lieutenant ARTHUR BLUNDEL VAN SOMEREN (71030) of 18th Field Regiment, Royal Artillery who died on 20th May 1940 aged 23. He was the son of Leonard William van Someren and Gwendoline van Someren of Camberley, Surrey. He is Buried at the Bruyell War Cemetery, near Tournai in Belgium. He was killed during a battle on the line of the river Scheldt before the final withdrawal to Dunkirk ahead of the German advance.

Leading Stoker ALFRED ARTHUR ANDREWS DSM of H.M. Motor Gun Boat 2002 who died on 12th May 1945 aged 28. HMMGB 2002 was on a special mission from Aberdeen to recover 3 British merchant ships at Gothenburg, Sweden when she hit a mine and was sunk in the Skaggerak, the body of water between Denmark and Norway.