You are here: HomenextTopicsnextPlacesnextTransportnextThe Next Station is Billericay

The Next Station is Billericay

The coming of the railway

With the coming of the railway, historic and picturesque Billericay has grown into a commuter town.

After the granting of a market charter in 1253 to Burstead, Billericay developed as a market town, although the name of Billericay was not specifically mentioned in official documents until 1291 when it was spelt as Byllyrica.

So how did the railway come to Billericay? 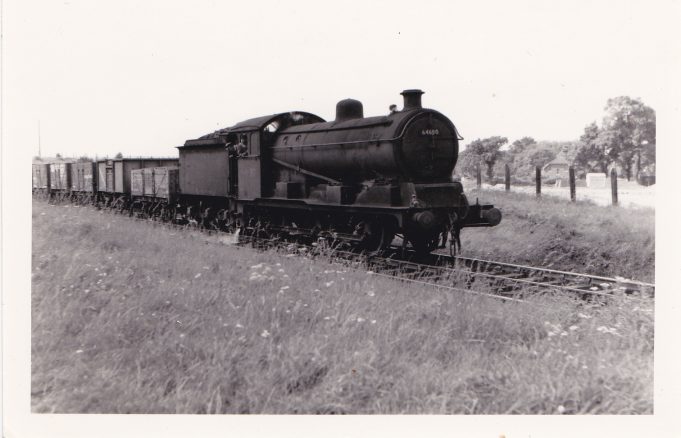 A goods train near Billericay in the early 1950s

Today people take for granted the fact that they can step onto a train and go nearly anywhere they want to. But the building of the railway tracks in Victorian Britain was an engineering feat as great if not greater than, the building of the pyramids or the construction of the Great Wall of China. Our railway system covers the whole of the United Kingdom.

However, in the beginning, getting permission from parliament to lay the necessary railway track was a significant challenge. The next major challenge was getting the powerful landowners to sell the land needed on which to build the railway system. It was the start of the “not-in-my-backyard” syndrome. There were also serious medical concerns raised by doctors who feared that people moving at speed would be severely affected by the motion, due to a lack of air to breathe.

Following the successful trials to prove the viability of a practical and efficient steam locomotive, the first railway system: the Stockton to Darlington was opened in 1825.

The received wisdom from historians has been that people did not move around very far from their place of origin until modern times. However a recent study of the 1901 census by the Billericay Historical & Archaeological Society has indicated that 22% of the 1,115 people living in Billericay in 1901 came from outside of Essex and 1% from outside of the UK, so clearly people did move around. This is further supported by the fact that Billericay had three stagecoaches a day taking passengers to London and to Southend until the railway arrived.

Billericay has to thank the Rev. J. H. Harris for persuading the Great Eastern Railway Company to route the railway through Billericay on its way to Southend. This route, Shenfield to Southend-Victoria was to become known as Southend’s “other railway line”.

Achieving this route was no mean feat for the planning and construction engineers. Billericay’s High Street is 315 feet above sea level and railways work best over flat land. To achieve an acceptable gradient for the train between Shenfield & Billericay a very deep cutting had to be dug through Billericay’s hillside. This 54 foot deep cutting was mainly dug by hand although later steam shovels were used to help the navvies. To align the track coming from Shenfield with the track coming from Wickford, on the other side of Billericay’s hill, a mariner’s compass and sighting posts were used to guide the diggers. 1884 saw the start of the laying of the metal track between Shenfield & Billericay.

The Railway Tavern in Billericay is dated from 1885. 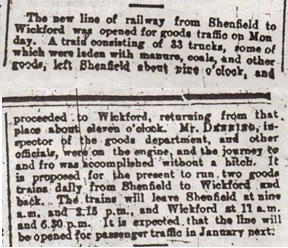 Newspaper cutting reporting the opening of the line for goods traffic

On the 19 November 1888 the double track section from Shenfield to Wickford was opened for goods traffic.

The original station at Billericay had public goods sidings. These have now gone, but  a photograph showing these and the third platform is shown below. 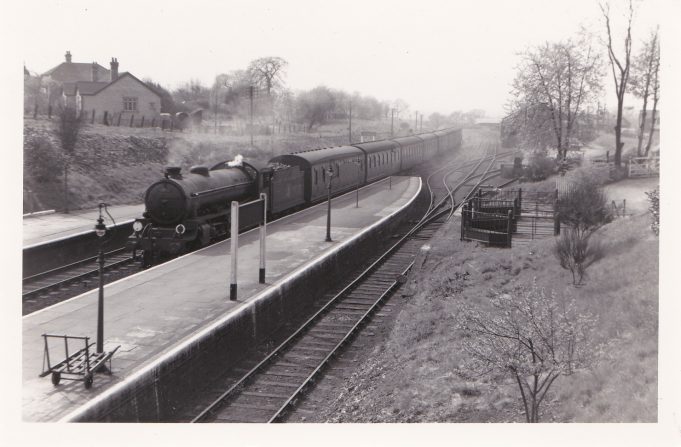 The sidings can be seen on the right in the distance with the goods shed. The third platform is in the foreground.

Great Eastern Railway ran excursions to Billericay to view the Zeppelin that had crashed at Snail Farm, South Green after being shot down on the night of 23 / 24th September 1916.

On 1st January 1923 under the Railway Act of 1921 the Great Eastern Railway became part of the London & North Eastern Railway, the LNER. These initials became used jocularly as the: late-never-early-railway. Colour light automatic signalling lights were introduced to the Billericay section of the line in May 1938.

During the severe storms of January 1953 the Liverpool Street Line was not affected, but the Fenchurch Street line was damaged over 3 miles of its track.

Electrification of the “Billericay line” came in 1954. The Tilbury to Southend Line was not electrified until 1961. 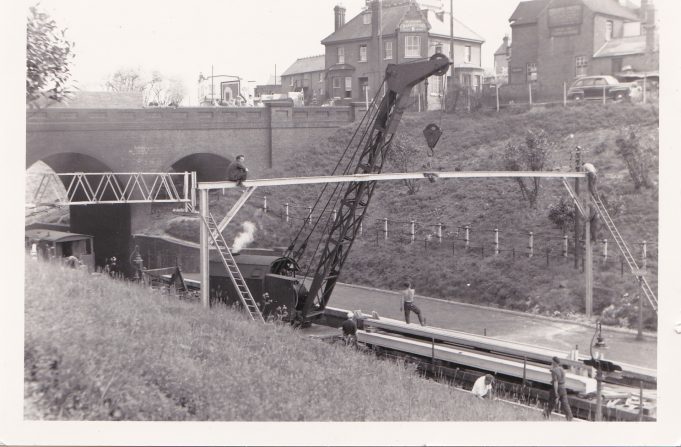