A Local Form of Transport
By Jim Devlin 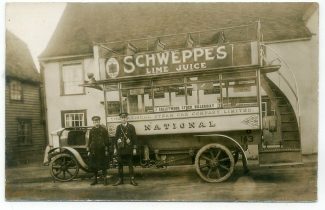 At the turn of the last century the single deck steam bus was to be found in London operated by the London General Omnibus Company and the London Road Car Company, both of whom used the Chelmsford steam chassis invented by Thomas Clarkson (1864 – 1933). These buses however made heavy losses and were withdrawn from service in London by both companies by 1905. By 1909 the London General had abandoned steam altogether and Thomas Clarkson formed his own company, the National Steam Car Company Ltd. with an initial fleet of four buses and they started services on 2nd November 1909. By the time the war started in 1914 he was operating 184 buses in London and out of Chelmsford. However petrol engine buses were too competitive and the steam buses could not match them. The last steam bus ran in London on 18th November 1919 and a few continued to work out of Chelmsford until in 1923 the age of the stem bus was finally over.

The steam bus shown in the photo ( which can be enlarged by clicking on the blue icon) is a Clarkson Steam Bus parked outside the Chequers pub in Billericay High Street. The date of the photograph is unknown but it may well be pre 1914. These buses were manufactured at the Moulsham Works in Queen Street, Chelmsford and were fuelled with paraffin oil. Note the mud on the wheels, which indicates that the road to Chelmsford was not that wonderful, and the heavy coat and boots worn by the driver, who was out in all weathers as of course were passengers on the top deck.