You are here: HomenextTopicsnextPlacesnextThe Tractenberg Family 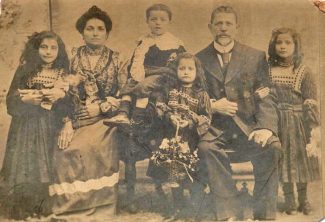 This photograph is dated 1906 and was taken in Stepney, East London. The adults are my Great-grandparents and the girl on the right was my Grandmother.

The Tractenberg family (many variant spellings) were Russian immigrants and originally settled in Stepney. Around 1925, the family moved to Buckwyns Farm Billericay, or to be more precise Buttsbury.

By then my Grandmother had had three girls and they all spent their time at Buckwyns during the summer holidays (I am sure there are photos, but they ‘could be anywhere’).

Of the three girls that my Grandmother had, one has died, and the remaining two, my Aunt and my Mother, are still with us and in their 90s.

I don’t think my Great-grandparents were farmers, so probably occupied a house called High View adjacent to Heads Farm.