The origin behind the design 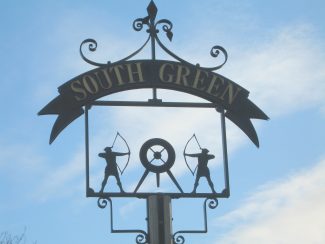 When designs for the South Green sign were considered the history of the Green was studied. It was discovered that in medieval times, by Acts of Parliament of 1252 and 1363, there was a requirement that all males over 14 years of age practised archery for 2 hours per week. This was required as there was no formal army at that time. Archery practice usually took place on a Sunday, often supervised by local clergy on a green. Since the Green was a piece of common land during medieval times it is very likely that archery practice took place there.

“The Green is the remnant of a much larger ancient village green, probably originally cleared from woodland. The village sign on the Green depicts archers – a reminder of the obligatory archery practice carried out on the Green in medieval times.”

A local blacksmith created the final design and manufactured the sign and it was installed by the Village Council in January 2004.