The Queen’s Coronation in 1953 was celebrated shortly after I started school in Mrs Grace Arthy’s reception class, or ‘baby class’ as it was called. I seem to remember cakes being handed out and I still have the purple covered book entitled “Royalty in Essex” which every child received. My years at that school during the 1950’s were not the happiest time of my life. Although I was lucky enough to be in the top set each year, it was compensated by the fact that I languished near the bottom of every class!

Some brick built extensions were constructed in the inter-war years, one of which housed the office of Mrs Norah Barry, the Infant Head Teacher and the 2 reception classrooms at the front.

The outside boys’ toilets were still roofless and without wash basins! The ‘Horsa Hut’ dining room and kitchen block were built in 1948. This was also used for assemblies but I can’t remember if they were held every morning or once a week. When Mrs Roy, the Junior Head Teacher, made a grand entry, usually late, she strode purposefully down the middle aisle to the far end while clutching some papers and a book, probably a bible, you could hear a pin drop. When Mrs Roy retired in 1959, we all congregated on the field to see her presented with a retirement gift which was a twin tub washing machine.

A three classroom timber building was erected c.1951 on the far side of the rear playground. The rooms were occupied by a kind silver haired lady, Mrs Sole (who was my teacher in 1955/56), Mr Ray Williams and Miss Florence Powell the music teacher. Mrs Sole tried to instil some deportment into us by making us walk around the classroom balancing books on our heads! That was a ground breaking year in my education, because for the first time we had desks with ink wells. Writing for the first time with old fashioned pens and fragile nibs was quite a challenge. It was our first introduction to musical percussion too i.e. triangles, symbols and tambourines. The cacophony must have been dreadful. In later years we rehearsed hymn singing in Miss Powell’s room and it probably drove Ray Williams mad as he occupied the room next door. His wife, Sylvia Williams occupied the classroom next to Mrs Gay’s in the old building. Mrs Gay lived in a bungalow opposite the school and the sweet shop was nearby where we could buy 1 penny ‘gob stoppers’ from the dispenser on the forecourt.

Halfway through my year in Mrs Butler’s class (1956/57), we were moved from the old part of the school into the newly built classroom block situated on the edge of the field. The rooms were occupied by Miss Lily Ager, Mrs Butler and Mrs Ivy Ashman. Mrs Roy had an office at the far end and this was a ‘no go’ area for children, former pupils would remember Mrs Roy as Miss Birch. Miss Ager lived at 19 Sun Street (next to the passageway) and she was very knowledgeable about Billericay history. During the spring term when there were activities on the school field, she stuck sheets of paper on the classroom windows to prevent us looking outside. However, there was a convenient gap left where her desk was situated! 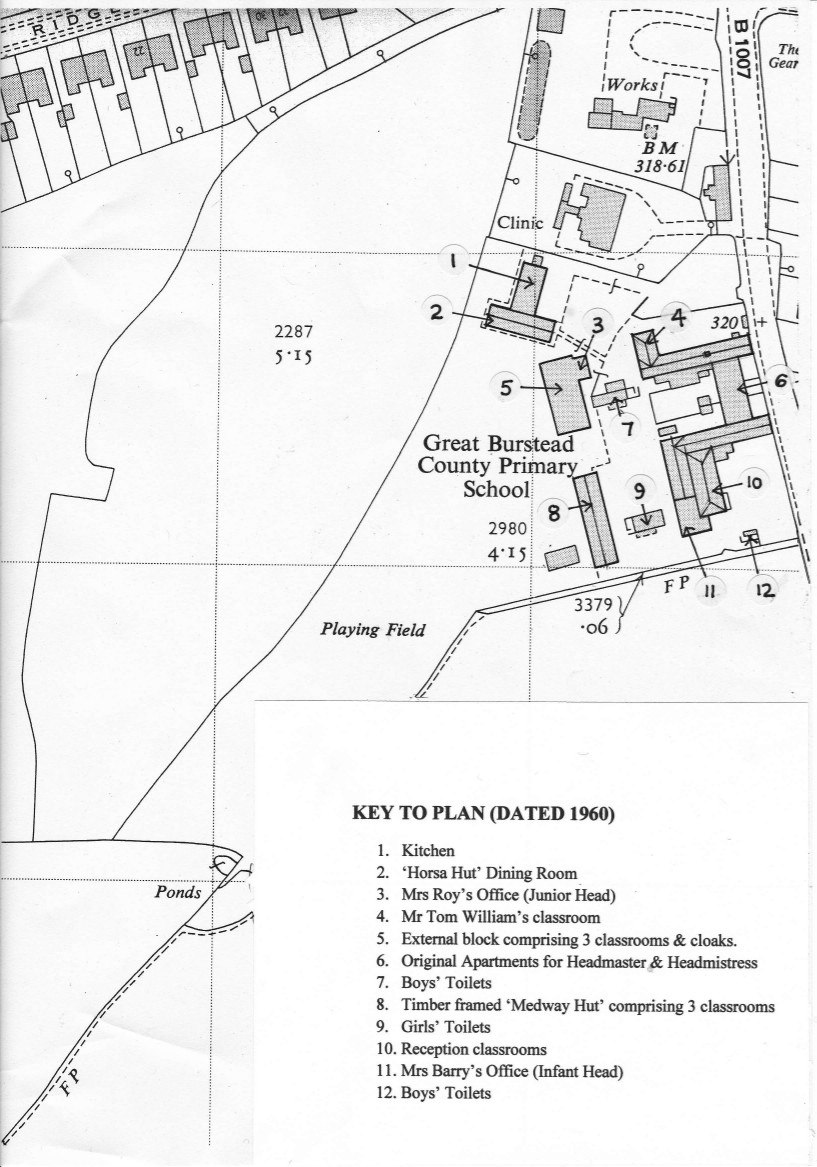 Mr Tom Williams was my final teacher in 1958/59. In a large class of about 44, I was the only soul who failed his 11+. However, I eventually redeemed myself leaving the Secondary School with 6 GCE ‘O’ levels. Tom Williams was a larger than life formidable Welshman and he lived in a prefab in Outwood Common Road. I can still remember the names and faces of many of the pupils in that class and even where they sat. There was Susan Odell, daughter of the High Street optician. She sat next to Sarah Spare who lived above Lloyds bank in the High Street. In front of me sat Susan ‘chatterbox’ Affleck who also lived in the High Street. Some of the boys, Messrs. Shuttleworth, Steele and Stevenson were fortunate enough to go to Brentwood Grammar School. I sat next to Avril Watts who lived at the bottom of my road, Hickstars Lane. And no one can forget Kay Fairweather! Peter Hughes had a D.I.Y. haircut and he could play the accordion without reading music. During that year every pupil had the opportunity to make woollen scarves on small wooden looms which we could take home in the evenings, a belated initiation into the industrial revolution perhaps? The school library comprised 2 bookcases in the corridor outside Tom William’s room.

Mrs Butler’s original classroom is now a thriving pre-school nursery and Quilter’s restaurant and bar (now called “The Ivory Rooms”), extends down the whole of the north side to engulf Tom William’s room. This still exists but is hardly recognisable. Such a shame, but that’s progress I suppose. The other part of the building has been tastefully refurbished and is occupied by the Billericay Arts Association, known as The Fold. On a recent visit, I was pleased to see that some original features had been preserved, such as the lovely brick arched doorways and open fireplaces in some classrooms. During my years there, I don’t recollect any fires actually being lit in them. The school field is now a housing estate and I remember sports days on it, complete with bunting, tannoy system and prizes on the table. One year I came 2nd in the slow bicycle race; my only sporting achievement.

The photo below was taken at the seaside in 1959 and shows me with my mother, Evelyn (nee Cullis) who attended the school in the 1920’s and my elder brother Robin who attended from 1949 to 1953, he left just as I started. 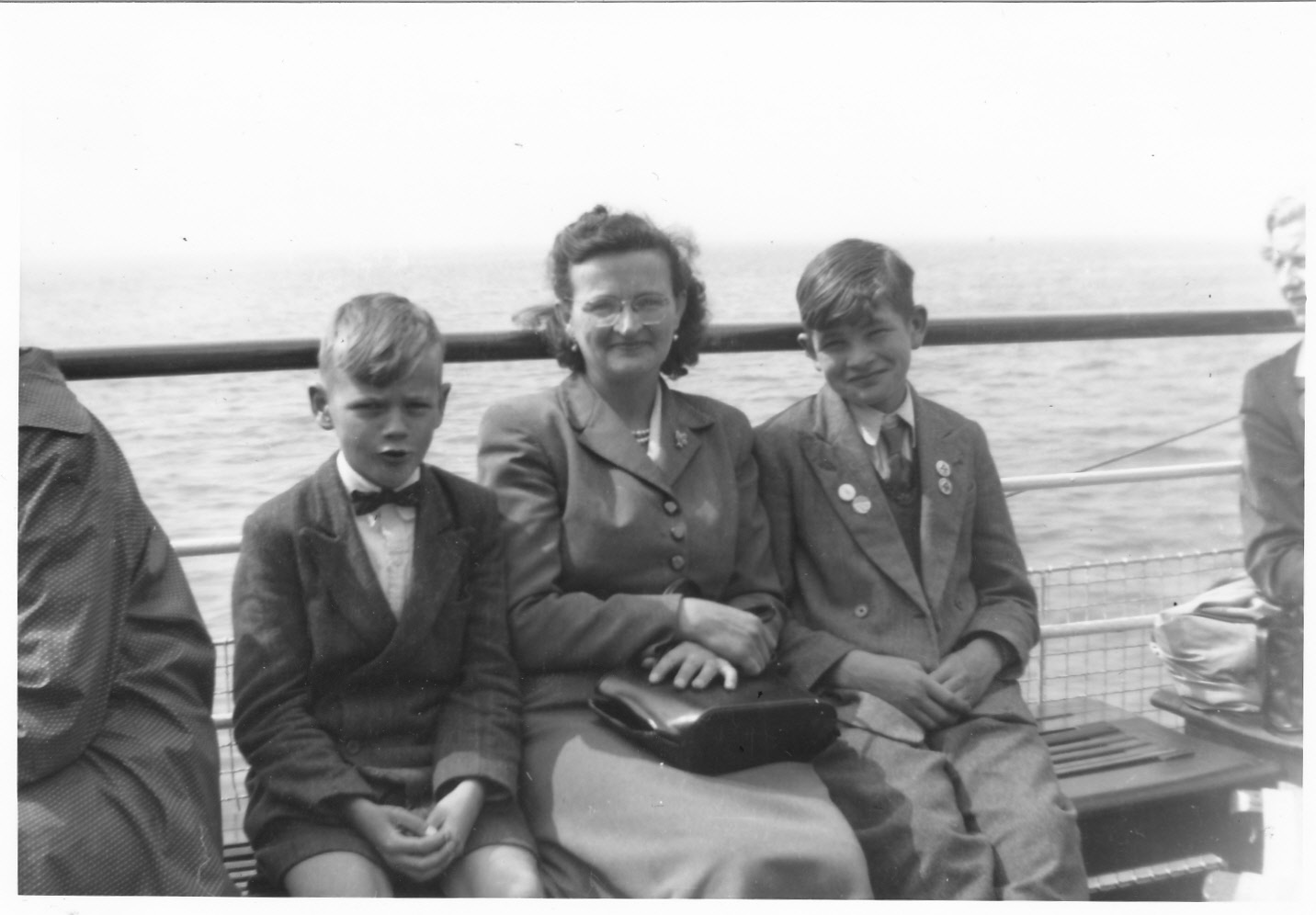 The three of us were present at the school’s centenary in 1978, which was a wonderful and nostalgic occasion. Much time was spent reminiscing in former classrooms and perusing old documents, photographs and memorabilia.

The buildings are not listed and for some years, all the windows were boarded up. It appeared to be derelict and ripe for demolition. Thankfully it has been revitalised and put to good community use. Long may it continue! 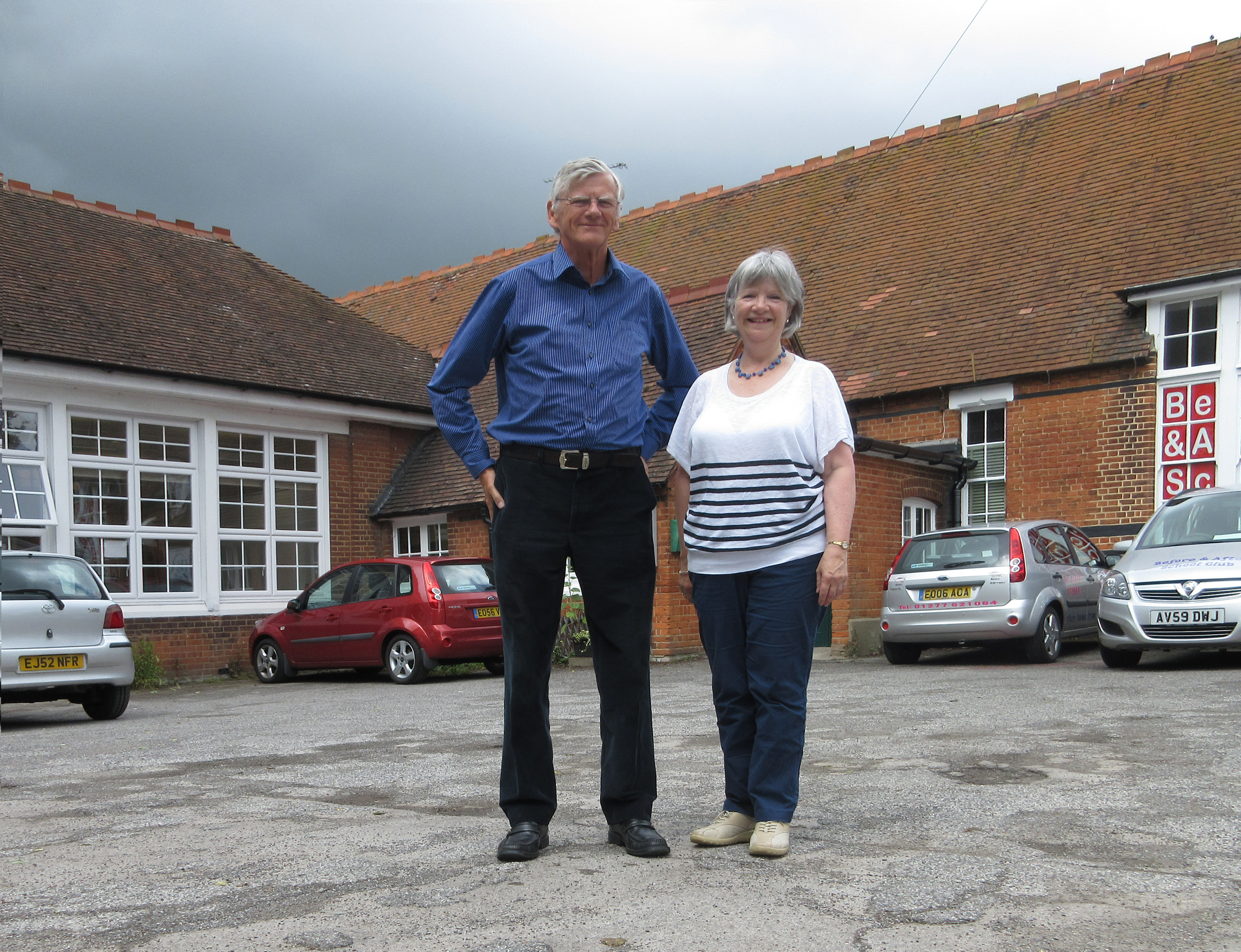 In June 2016 and for the first time in 57 years, Sue Odell and Terry Lockhart had a reunion at the former Great Burstead County Primary School. They were both in Tom Williams’s class in 1958/59. The photo was taken in the front infant playground, now a car park to The Fold