Football in the late 1940's and emigration to Australia 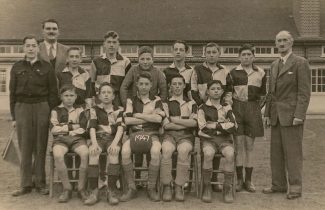 zoom
I am in the front row on the left with Mr "Trotter" Whitworth with the moustache and Mr "Tiggy" White on the right. 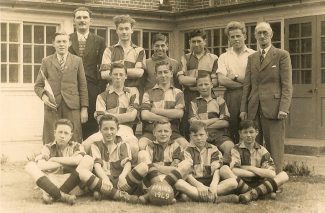 zoom
Mr "Trotter" Whitworth & Mr "Tiggy" White with me second from right in the front row. 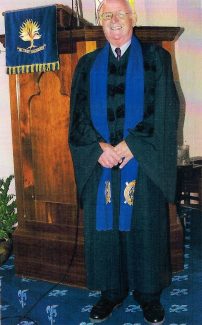 zoom
Moderator of the Presbyterian Church of Australia 2001-2004 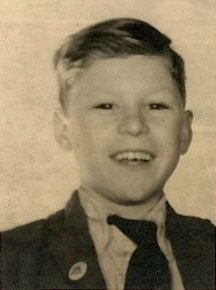 zoom
Photo of me as School Captain 1949 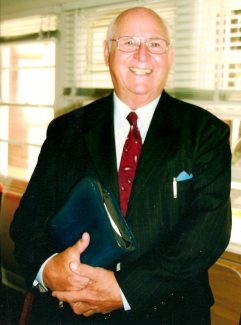 May I introduce myself my name is Very Rev. Jack James Knapp and I am 76 years of age. I attended the Billericay Secondary School from 1946-1950. My mother brother and I spent the duration of the second world war in London (doodle bug alley to be specific) my father was in the RAF. My father decided to move to the country to get a fresh start as most of the buildings in our locality were damaged in some way as a result of the heavy bombing. In 1946 we moved to the Rising in Billericay and the wide open spaces which we greatly appreciated.

When we arrived I went to Billericay School. The Headmaster was Mr P.G.White affectionately known as  ‘Tiggy’ or at least his cane was! It is with fondest memory that I recall him and his dear wife who befriended me, thus assuring a smooth transition from Tottenham where our school was completely demolished in 1942.  Other teachers I recall who had a great influence on me were Mrs Gwen Bowles, Mrs Sybil Bartlett, Mr E.W.Martin, Mr K.P .Howard, Mr F.Rouse and Mr Huggett, However, the greatest impact on my life were the two sports masters Mr Trotter Whitworth and Mr Ray Yardley. Both spent many hours with me on the football field, so much so that I became the first boy from the school to represent S.E. Essex playing with boys several years older than I. I disappointed them and my class teacher when I rejected a scholarship to Chelmsford Grammar to remain at Billericay. It was a simple decision Chelmsford played Rugby Union and not football.  I still have my report book of which I am very proud, successively I finished 13th, 3rd, 2nd, 1st.1st.1st.1st.  I was house captain of Effingham, captain of the school football and cricket team and captain of the School (Head Boy). I cannot remember the names of the other boys in these photos. Can you help me with this?

It was a privilege to journey to Belgium in 1946 with a party from the school led by Mr Martin we stayed in Brussels ; this trip is indelibly locked in my memory. Does anyone else remember this trip?

My father decided to immigrate to Australia in 1952, his brother was demobilised there in 1950, and he was in the fleet Air Arm. We settled in Sydney and I assisted my father in building our home at Toongabbie a suburb of Sydney . I completed my apprenticeship in toolmaking eventually becoming a production superintendent of a large engineering company in Sydney .

In 1966 after becoming a Christian at a Billy Graham Crusade I entered the Ministry of the Presbyterian Church of Australia and completed 6 years of University study and was then ordained,  subsequently serving 28 years as Superintendent of the Australian Inland Mission. In 2001 the Centenary of the Presbyterian Church of Australia I was elected Moderator of the General Assembly the highest honour that can be bestowed upon a minister of the Presbyterian Church. In 2003 I represented the Australian Church at the General Assemblies of the Free Church of Scotland and the Church of Scotland a far cry from the little cockney kid who had left his homeland some 50 years earlier. I visited my former home in London and was astonished to see it still standing, having made myself known I told the history of their home which incidentally had the chimney replaced the previous one was knocked off by a land mine floating down and devastating a large area some ½ mile from us.

I married an Australian girl and we had a son and adopted 2 daughters.

I hope I haven’t bored you with what seems a self promotion exercise but I thought you ought to know what one of the boys from Billericay achieved due to the wonderful nurturing by the Billericay Secondary School .

I am looking forward to seeing more about the “old school” on this site.