Life in the fifties at the Billericay School 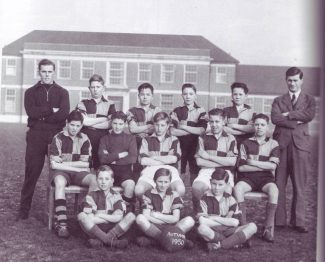 Although sixty years ago is such a long time ago, many people remember being a pupil at the Billericay School. Mr Ronald Eden had taken over headship in September 1950 following the death of Mr ‘Tiggy’ White. Links with the Great Burstead Junior and Mixed Infants (which later became Billericay Primary School in 1957 and later Quilters) were strong. The new head was a keen sportsman. Cricket and football teams were extremely successful due to the expertise and supervision of Ray Yardley (pictured in this line-up of pupils in 1950)