The Child in the Park 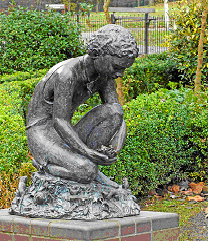 As a result, the bronze statue of ’The Child in the Park’ was created by renowned Essex sculptor John Doubleday.

The statue, which was created to appeal to children of all ages, is situated in a small garden, created in partnership with the Basildon Borough Council Parks department, in Lake Meadows Park. Whilst the statue is based on a real child, the sculptor preferred the sitter to remain anonymous so that children could use their own imagination to decide whether it is a boy or  girl.

In the child’s hands is a snail and around its feet are 17 small creatures – a butterfly, a dormouse, dragonfly, field mouse, frog, grass snake, hedgehog, mole, newt,  shrew, spider, stag beetles, stoat, toad, vole, weasel and a wren. Around the neck is a pendant with a seagull, signifying flight and freedom, and some keys, suggesting that the child can unlock it’s own destiny or that they are the keys of heaven.

In the ensuing years the statue has brought enjoyment to many people, families and children in particular, as can be seen by the shiny noses of the creatures that have been touched by many small hands.

The project was funded by Awards for All, Eastern Arts, Cleanaway Pitsea Marshes Trust, Basildon Council and Billericay Town Council, as well as many local organisations and individuals, including schools

.Sadly on the night of Tuesday 14th January 2017 the statue was stolen by thieves. However it was later recovered from a garden near Brentwood and reinstalled.