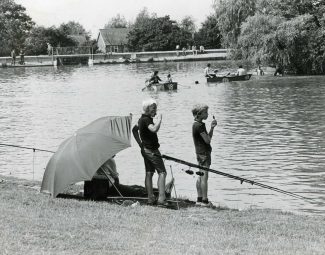 zoom
FIshing on the lake in 1981
© Basildon Echo

Remembering Lake Meadows and the fishing I expect many can can remember the summer of around 1966 or 67 when Basildon District Council (BUDC) drained the lake in order to do repairs raising the height of the bank along the south of the lake and installing the concrete and steel railing sluice at the western end. Before these works were done there was a magnificent willow tree whose branches covered the bank and a section of the lake. When the Council drained the lake they left a small pond shaped puddle of water around the two islands of the lake. Once the clay that had formed the bottom of the lake was hardened and we could cross over the mud every lad in the district was to be found fishing in the remaining water. Oh what a catch we had! Although the Council had transferred the bigger fish all the tiddlers had been left behind and with a few maggots bought from the fishing shop in Radford Way you had a good days sport and easy pickings. Can any one else remember this?

Other off limits fishing was to be found at the pits in Goatsmoor Lane off Potash Road, a lengthy cycle ride from South Green but you usually caught a few golden carp and I remember bringing two home in a empty offal tin suspended with wire or string from the bike handle bars. The tin I had scrounged from a local butcher! These fish lived a good many years in the pond in our garden.

The Walls ice cream bricks always seemed to taste better when bought from the Café at Lake Meadows than anywhere else. Finally, once the lake was refilled, boating hire was again available on the lake but no swimming. One Sunday afternoon Mum convinced Dad to pay for me to have a kayak out on the lake. It was great for ten minutes, as I paddled myself with increasing confidence and power. But then I caught a long heavy piece of weed with my paddle and in an instance found I had capsized the canoe upside down on top of my self. Fortunately I could swim and I struggled to the bank in around at least 6 foot of water. I emerged filthy with mud and stinking water, soaked to the skin and shivering. With not a bit of sympathy and retribution from Mum and Dad and my sister Hazel in fits of giggles.  My sister’s giggles were soon replaced by disgust as she had to sit next to a soggy me going home in the car.