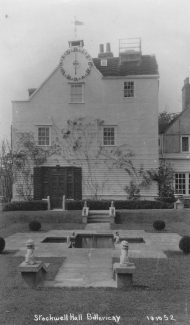 zoom
A view of the side of Stockwell Hall clearly showing the clock. Taken in 1952

Formerly owned by the Earl of Mexborough. A Cl6-C17 timber-framed and plastered house, re-fronted in the C18, with a plain parapet. 2 storeys and attics. 6 window range (arranged 2:1:3), double-hung sashes with glazing bars, with moulded cornices and sills on stub brackets, and louvred shutters. An open porch projects on the front. On the east gable there is a small C18 bellcote and below, in the gable, a large clock face with the figures originally made of blackened bones, but now largely replaced by wood. Roof tiled, with 2 small gabled dormers and a large central 3-light gabled dormer, half hipped. At the west end there is an external chimney stack rebuilt at the top, with diagonal shafts. The interior has fine C16-C17 and C18 features including C16-C17 panelling, doors and richly carved fireplaces. There is the remains of a moat. (RCHM 2).

Stockwell Hall is the residence of the Hon. John Henry Savile, and has attached grounds of 20 acres. Kelly’s Directory of Essex (1902)

The Billericay Society was formed on Saturday, 27th July, 1935. At that time, the Council for the Protection of Rural Essex wanted to set up a local area committee, so a meeting was held in Lockers Hall, and the first President was Mrs Ward, owner of the Hall.

Consequently, The Society was then known as ‘The Billericay Area Group of the Essex Branch of the Council for the Preservation of Rural England’. The first Secretary was Basil Brooks, J.P.

It was long felt that such a title was unwieldy, and so in 1972 the name was changed to “The Billericay Society”, affiliated to the Council for the Protection of Rural Essex.

Following the death of Mrs Ward, the Earl of Mexborough (who lived in Stockwell Hall, Little Burstead) took over as President in 1943.