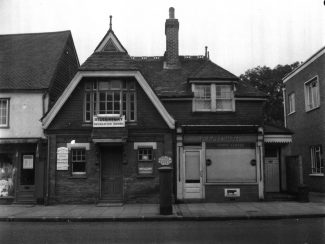 zoom
The Reading Rooms in the 1950s

The whole building was erected in 1886 as the Billericay Reading Rooms by Major Spitty.

On the right hand side is Westbury Cottage which was occupied as a private house originally. In the early 1900’s this became Westbury Dairy and traded as such until World War II. It then became a grocers shop as shown in the photograph and in 1959 became a baby shop. In 1962 the entrance hall and front door was incorporated into the shop and a new shopfront was installed. Before this shop became the photographers it is today it was known as “Music & Models” and as the name suggests it sold musical instruments as well as models of all sorts including model trains.

On the left hand side is the Readings Rooms proper, “a literary institute for the working classes”. This did not mean that it was totally devoted to literary pursuits as it contained billiard tables and facilities for other games and pastimes. It was the only place in the town that men could meet apart from the pubs and did not admit women until 1904 and then they were only allowed in on Wednesday afternoons.  By the end of the First World War decline in the use of the rooms caused the Trustees to dispose of the library As time went on the use for games also declined and in the late 1950’s a decision was made to turn the Reading Rooms into a venue for hire to “bona fide” local organizations, as it is today.