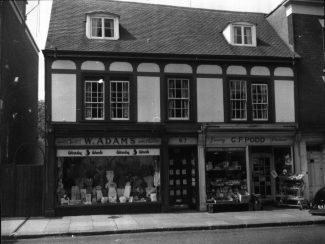 This building was originally errected as one house in the 17th Century. Records show it was a double fronted shop around 1885 but was later returned to a private house again with a porticoed entrance, like Bank House next door, and bay windows either side. In the 1920’s it became the two shops as shown in the photograph. On the left, at No. 67,  is William Adams’ drapers shop and on the right, at No. 65, is the smaller grocers, F. Podd. These two shops remained in the respective families until in 1959 the premises were sold to Kingstons, the chain of butchers, and the shop was converted again into single shop with a modern front. In 2003, as the supermarkets gained the upper hand in meat sales, the shop was converted into the hairdressers that we see today.