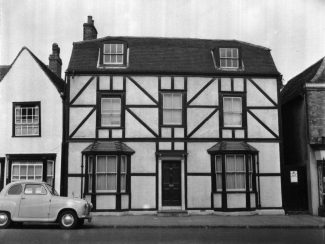 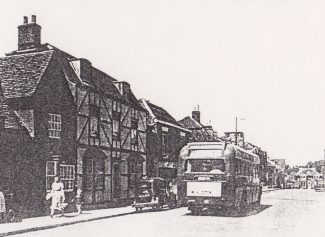 This building was originally built in Tudor times and as usual was modified throughout it’s life and the outside is most certianly mock Tudor. Records show that this building was at one time the Anchor Inn, just one of many drinking establishments that have been in Billericay High Street. Unfortunately, as was often the case in the High Street, this building was demolished in 1960 and replaced with a modern retail building. The car in the foreground is an Austin A30, which was much smaller than the original Mini.

The lower photograph, sadly of very poor quality, shows a longer shot of the High Street. Based on the vehicles that can be seen, the photograph may be earlier than 1955.