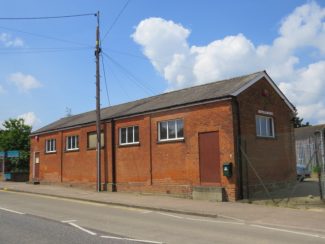 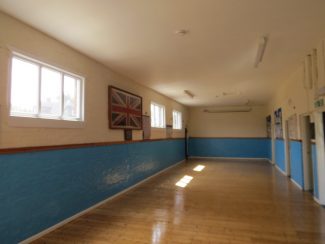 With the help of the Essex Records Office Archivist we have managed to find the following information about the history of our building which we purchased on 14th March, 1960 and was opened as a ‘Boy Scout Head Quarters’ on 2nd December, 1960 by the County Commissioner David Papillion.

It is hard to research the history of a site without knowing exactly where it is (modern road numbers and postcodes have no meaning in historical records). However, we identified the building as the ‘Sunday School’ shown on the western side of the Laindon Road on the Ordnance Survey’s 1:2500 map of 1895 (Essex 2nd edition, sheet 68.2).  This building appears as a single range aligned with the road, having matching forward projections at each end and a single central projection at the back.  It stood about 50 yards to the north of another building marked ‘School’, which is the Board School (later Quilters School), opened in 1878.

A building of the same shape appears on the 1:10,560 map of 1866-1874 (Essex 1st edition, sheet 68), but there it is marked not ‘Sunday School’ but  ‘School (Boys)’.  An Ordnance Survey benchmark is shown on its north-eastern corner.  We assume that it was the National School, which according to William White’s History, Gazetteer, and Directory of the County of Essex … (2nd ed., Sheffield 1863) , p. 539, was built in 1838.  Probably the Board School later made this National [i.e. Church of England] School redundant, and such buildings were often then used as parish Sunday Schools.

The same building appears again on the Great Burstead tithe map of 1840 (our D/CT 63B), but is not named.  It is close to the site of the former parish workhouse, the redundancy of which under the New Poor Law of 1834 may help to explain the school’s location.

If the above sequence of assumptions is correct, 1838 is probably the date that the hall was built.

The first documented evidence that we have found for 2nd Billericay is on a Annual Group Re-Registration form, dated 28th September 1928 – Group Registration No. 17097. This seems to be due to the change in registration procedure in 1928, this being the first time that Imperial Head Quarters registered groups and not individual sections.

The next set of papers that we have are from 5th November 1946, these show the Group as being sponsored by the Congregational Church.- it also indicates that we are Sea Scouts! Our registration number has changed to 24944 with 24 Sea Scouts and one leader.

We then held our meetings in the Mayflower Hall (as we had no home of our own), until the Hall was required by the church for their own activities. Accommodation was then found in the Church of England old hall (the present H.Q.) until the building was sold by the Ecclesiastical Commissioners to the King’s Own Messengers Bible Class. From then onwards meetings were held in the Billericay Secondary Modern School.

It would appear that the first pack opened in 1949, with the second opening in 1966.

No longer a Church Group

Then on 3rd September 1952 the sponsorship by the church ceased, and the group became what is known as an ‘open’ group.

As the years passed many avenues were investigated and plans submitted to the council for approval, but unfortunately either the price was too great or the land was not allocated for a building of our type. However, in June 1959 the Group were informed that the old church hall was for sale. After discussing the matter, the Group Executive Committee decided to try and negotiate a satisfactory price. It was 14th March 1960 when the papers were finally signed and the hall was finally our own, the cost £ 3,500.

In 1960 only the main hall existed, the Group Exec decided that certain improvements were required, namely electric lighting, and sanitary facilities, these are situated in the extension at the rear of the hall. This also gave us the two section rooms, kitchen and dedicated Gear Store.

Oh No, here come the Ventures

In 1973 the Venture Scouts (albatross) first appear on the Census figures. This unit unfortunately closed in the early eighties, however the Group adopted the District Venture scout Unit ‘Sub-Zero’ in 1992. Sub-Zero then became the senior section in the group.

In 2002 the scout Association revamped the older sections forming a new District based Explorer Section for the 14 to 18 age band, and replaced Venture Scouts with Scout Network, which was for the 18 to 25 age group.