The Land Before Football

A Brief History of the Blues' Hallowed Ground 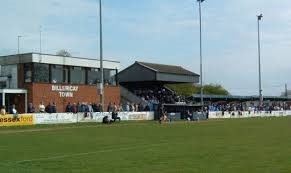 Billericay is a town with as much historical gravitas as almost any district of London. Used as a half-way house by the 13th-century Pilgrims on their way to Canterbury (how many of the surviving Canterbury tales were inspired by colourful characters found in Billericay, we might wonder?); brave local men fatally assisting in the Peasant’s Revolt; religious rebels meeting grizzly ends in opposition with the reign of Bloody Mary; and to the modern-day, the home of the Shipmans in TV’s Gavin and Stacey, residence of comedian Lee Evans – the list goes on.

The ground on which New Lodge was built has long been suspected by historians to have been near to, if not the ground itself, of an ancient cavalry fort built and used by the Romans to defend attacks from Norsey Woods. Strong evidence for Roman settlement in this area has been found with the discovery of two-thousand-year-old coins and archaic weaponry, and lots of it – enough to presume the land of Blunts Wall Road was the centre of a Billericay-based Roman militia.

Fast-forwarding to late 19th-century Essex, this hallowed ground had remained untouched by the effects of the Industrial Revolution, and Billericay Town Football Club was formed in 1880 – beating the arrival of the railway network in Billericay by nine years. Matches were first played in the area now known as Sun Corner, with a backdrop much altered to what can be seen there now.

The Rising Sun pub was a residential home, then a coaching inn, and is now the much loved and cherished free-house, built some 300+ years ago. The Red Lion pub has been potentially dated to early 1500s – so no shortage of places to drink for the Blues’ original starting eleven. Numbers 98 – 133 High Street have been given various building dates anywhere between 1600 and 1850, and of course the beautiful St Mary Magdalene church has been the centrepiece of Billericay since around 1500. Besides this, little of what we know now was standing when Billericay Town first took to the field.

Billericay Town FC eventually found a home next to the Archer Hall in Laindon Road for some years, playing at junior level alongside fellow local team, Lake Meadows-based Norsey Rangers FC. New Lodge was built in its original form and housed Outwell Common FC, before an ever-growing Billericay Town FC took possession of the ground – and here they have remained.

Cricket was played at New Lodge during the summer months in the 1970s and now, of course, Blunts Wall Road boasts the cricket ground and tennis club as well the Blues. Renovations have been carried out, stands brought over from Newbury, and the floodlights illuminate a treasured patchwork history of the proud football tradition found there.

Through Billericay, the Romans followed their Emperors and the Pilgrims followed their God on a road to greatness, and the modern people of Billericay have faithfully followed their football team to Wembley and back. This is a town laden with history – but much, much more wouldn’t hurt. Come on you Blues!