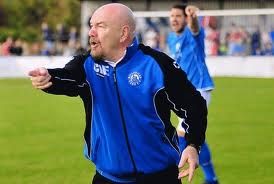 Where did it all start for you, Craig?

I played as a junior at Arsenal; I was a bit of a scallywag though – I’d never have someone like me play for me, I was too much hard work. After a bust up I walked out; I hoped another big London club would pick me up but, unfortunately, they didn’t.

I became a professional boxer for ten years and went back to football when I was about 30. I met Neil Banfield at Charlton [now at Arsenal], who asked me if I wanted to help coach the youngsters, and I really enjoyed it. I did my coaching badges and went to Barkingside in their centenary year. They’d never won anything and in my first year, they won the London Senior Cup, and then won the League twice. I spent five years coaching the Southend Youth Team, then I went to Grays, then Redbridge, Chelmsford then Dulwich. This is now my third season at Billericay Town; Billericay hadn’t won anything for 35 years and in my first year here we won the Essex Senior Cup, and last year we were promoted to Conference South, the highest level Billericay Town have ever played at.

What team do you support?

I’m an Arsenal fan. Everyone in my family is – we’re fanatics!

What’s new with the Blues this year?

We’ve begun the Junior Blues scheme, which we’re starting on the 26th January. It’s a programme for 5 – 16 year olds. We’re going into schools to coach, they’re coming to the ground; there have been groups of boys and girls from Mayflower School who are really keen to train as referees, and we’ve had representatives from the Essex FA come in and speak to them. They had tours of the ground and watched the games; they had a great time here. We had some really nice letters from their teachers to say how much they enjoyed it, which was great to see.

Your last home game against Farnborough was called off last minute due to unsuitable conditions, and there was quite a controversy surrounding the decision. What happened?

I felt the pitch was playable. We’re non-league and our pitches aren’t the best, and to be honest I was put off by the Farnborough manager’s attitude. It isn’t a great pitch, but it was playable. From the minute he walked in he was moaning about this and that, but it was the referee’s decision and you have to respect his decision. He spent about half an hour making his mind up so it must’ve been close; it was a well-though-out decision. It’s been rescheduled for 5th March.

BTFC are one of only two teams to win the FA Vase three times. What does that legacy mean to you?

They were amazing achievements. We can’t offer players great money but we can offer them a great history. There were unbelievable scenes back then. There are so many great people still around now who were there through all of that, whose memories are just incredible. When we were promoted last year, there were old boys with tears in their eyes, because they remembered Billericay’s achievements from back then. I’m so thankful to all of those people who stuck by the club in the old days, for making this club what it still is now. If I can achieve even half of what they did then, I’d be absolutely delighted.

Why should the people of Billericay come here and watch the games, and be a part of the club?

I like to think that we are a very entertaining side! We’re a welcoming club, so many friendly people and it’s a place you can bring your family and friends – it’s just a great place to be. The supporters have always been brilliant to me; I look forward to coming here. It’s a great club to play for, and a great club to manage.

So many people living in the Home Counties feel they have roots elsewhere, and support the big London clubs and the Top Six teams instead of their local side – how does this affect you as a small club?

Well I’ve always been an Arsenal fan, and people will support their Chelsea, their Man Utd, but they’ll always have their home team as well. Your local team is closer to your heart. I like to think we really give something back; here you can watch the match then talk to the players, have a drink with the players – that’d never happen at Arsenal! And I do think that the Premier League is just a business now and of course there’s far too much money in it all now. Here, there’s personal involvement – the chairman and the owner are always at the bar!

What has been your proudest moment as manager here?

Winning the league, it has to be – closely followed the Cup, as it broke that barren time! It was amazing for me to see what it meant to people. We had a difficult and very emotional season; we took some dreadful injures, especially our goalkeeper, who was paralysed. He has made an amazing recovery with an unbelievable spirit. He can walk again now; he’s an inspiration.

What would be the dream position for the Blues in five years’ time?

If we can progress every year the way we have done these past few, I’d be really happy with that. I’ve left every club I’ve managed in a healthier state than when I arrived at it. If we can maintain our progress, and if I am still here, that’s a dream for me.