About the Billericay Society

The first meeting of the Billericay Society took place in Lockers Hall, the home of Mrs Ward, on Saturday 27th July 1935 . Mrs Ward became the first president of “The Billericay Area Group of the Essex Branch of the Council for the Preservation of Rural England” as “The Society” originally called.

The first Hon. Secretary was the local magistrate Basil Brooks JP. In 1943, on the death of Mrs Ward, the Earl of Mexborough, who lived at Stockwell Hall, Little Burstead became President.

In 1972, this cumbersome title was reduced to “The Billericay Society”.

Our affiliation to the Council for the Preservation of Rural England [CPRE] continued. The CPRE changed its name in 2004 to the Campaign to Protect Rural England {CPRE}. This change to the title of the CPRE reflected the greater degree to which developers are threatening the countryside by wanting to build houses on Green Belt land.

The objectives of the Society are: [a] To protect and promote the amenities of the township of Billericay and its surrounding countryside. [b] To arrange visits, meetings, and other activities and generally take any lawful action necessary for the attainment of the above objectives.  An example of this is the 1978 Sun Corner protest organised by the Society.

The Billericay Society is open to all who are interested in preserving and enhancing the local environment around Billericay.

The AIMS of the Society can be summarised as being:

The Society erected the first of three wooden “Welcome to Billericay” town signs in 1953 on Perry Green, beside the A129 junction with Mountnessing Road. 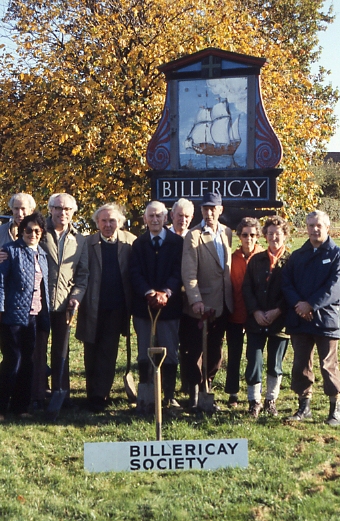 The original wooden sign on Perry Green just after it was erected.

Should you wish to join the Billericay Society please come along to one of our social evenings on the third Wednesday of the month at the Day Centre Chantry Way or collect a membership application form from the Cater Museum at 74 High Street (open most days between 14:00 to 17:00).