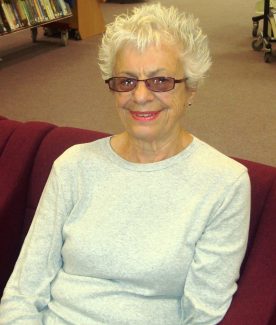 I moved to Billericay from Tiptree in about the 1970’s from Tiptree. I decided I wanted to come back this way because I come from Dagenham. So we went to Brentwood first and looked round – wasn’t keen, saw a sign that said Billericay so off we came and I really liked the town. We bought a house at Home Meadows.

It still is a nice town, but then things were so much simpler weren’t they? Crime – didn’t have hardly any so that was very nice. The children were all very polite. Really I suppose there’s been big changes over the years, like I say it’s still a nice town, near the sea, near the country and near London.

I was Secretary, I’ve retired from that recently, of the Billericay Archaeological and Historical Society. When I first joined it was more archaeological but then people got more interested in history so we changed over.

Billericay’s got a lot of archaeology, a lot of Roman things. I think some of it’s in Chelmsford Museum, some in Southend.  Be nice when Basildon gets a proper museum, perhaps the stuff can go there.  I was Secretary for about 20 odd years roughly.

We still get a good turnout, we’ve had some problems but we seem to be doing OK. We have trips out and we have a speaker every month so if anybody would like to join you’re all very welcome.

It has changed I suppose a lot of the building since I’ve been here, before that probably even more which is a shame, they got demolished. I can remember one of the buildingsthat had the Gas company/ the electric company, shame when they closed down but Shelley’s was here.

I suppose it has some big changes really, not always for the better but now the Billericay Society keep an eye on all this and make sure that its not going to get spoilt and they don’t pull anything else down. Its coming up to 75 years, well its all part of the CPRE anyway, so we keep an eye on it.

I think people are more interested now they never used to be, because of television, the history programmes people are more aware of what can happen, so I’m hoping they’ll keep the town as it is. Which is nice. I wouldn’t want to move.