A Short History
By Richard Lehman 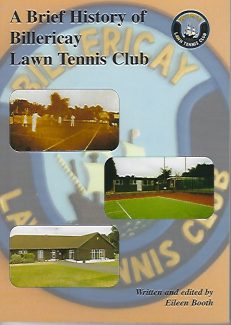 Today Billericay Lawn Tennis Club Limited is a modern progressive tennis club with over 300 members located in the town of Billericay in Essex. The aim of the club is to provide outstanding facilities for its members and visitors to play and enjoy tennis at a competitive and social level. It prides itself on being a friendly club and welcomes new members, visiting players and guests to enjoy their facilities. The club is known throughout Essex as being a well-managed club. We have a strong financial base and ongoing support from volunteers and members. The day to day running of the club is dealt with efficiently and strong links have been formed with local schools. The club however has been around for about 90 years.

There has been a tennis club in Billericay from about 1930. The original facilities were located in Mountnessing Road and included two hard courts, three grass courts, pavilion, car park and it is believed that the membership varied between 50 and 120 during that period.

During the Second World War, the facilities were untended. From 1939, the three grass courts became rough grazing for horses, a trunk water main was laid under one grass court and the land was not properly reinstated. The two hard courts became overrun by vegetable growth breaking up the surface and foundations, thus completely destroying them.

Finally, in or around 1950, the owner of the land removed and disposed of all the buildings, wire surround, equipment, etc. and the land became derelict.

Meanwhile, in 1948 a new post-war tennis Club had formed elsewhere in the town. Two grass courts in a private garden and a further hard court in another private garden became the base of the Western Road Lawn Tennis Club and was duly affiliated to the County LTA in that title. This Club flourished in the town, attracting not only seniors but also a thriving junior membership.

However, this all ended in 1955 when the owner of the two grass courts died and his heirs were required to dispose of the house and land. The Club was immediately faced with the problem of continuing its existence by seeking new premises.

Early in 1955 the rapid expansion of Billericay by private development had already commenced and it was obvious to the Club Committee that a site capable of accommodating expanding tennis facilities was essential for the benefit of both the existing and incoming population.

After consideration, the Committee approached the owners of the then derelict premises of the pre-war Billericay LTC at Mountnessing Road where there was space for five courts. These premises had established user rights as Tennis Grounds under the Town & Country Planning Acts and were included in the Essex Development for Private Playing Field purposes. The owners rented the land to the Club for £l0 per annum, subject to three months’ notice to quit. No greater security of tenure was offered at that time.

Accordingly, in 1955 the Club became the tenant of the Mountnessing Road site and the Club name was duly changed from Western Road Lawn Tennis Club to Billericay Lawn Tennis Club. The Club entered into a new phase whereby the growing town of Billericay could derive from the benefit of a growing tennis club within its perimeter.

Throughout the summer of 1955 and the following winter, the Club members devoted their weekends to restoring the ground. Members were solely responsible for the labour required to effect the restoration – relaying the surface drainage, erecting wire surrounds on steel posts, sinking concrete net post bases, etc. Plant was hired for the initial grass cutting and the courts were mown, rolled and partly re-turfed and it was only for this last item that professional assistance was obtained.

In the late 1960’s the Club was given the opportunity to purchase the freehold of the land and the Committee felt that this would be an appropriate step to make. There is no doubt that this single act was the most important in securing the long-term future of Billericay Lawn Tennis Club. The present Club owes a great debt to these founder members for laying such a firm foundation for subsequent members to build on.

With the security of ownership safe, the succeeding Committees and officers felt able to proceed with more projects to improve the facilities. The Club had always considered itself to be forward thinking and in 1968 BLTC was the first tennis club in the district to install floodlighting on outdoor courts.

During the 70’s and 80’s further hard courts were constructed. BLTC was also one of the first clubs in the district to install the new Astroturf (subsequently called artificial grass) court surfaces, and in 1990 a new brick-built clubhouse was completed replacing the original timber pavilion.

By the early 90’s the Mountnessing Road site had been developed to its full potential and the Club was unable to consider further improvements. So, when in early January 1994, the Club was approached by a local developer asking if BLTC would be interested in discussing the possibility of exchanging its ground, for a larger purpose-built facility situated nearby, the Committee was very keen to investigate this opportunity.

The scheme proposed by the developer was to exchange BLTC’s Mountnessing Road site, which the developer wanted to use for residential development, for a larger freehold site. These early discussions were encouraging enough for BLTC to form a Steering Committee to investigate the opportunity further. The developer had identified a four-acre site off Blunts Wall Road adjacent to the Cricket Club ground (which had been similarly relocated by the same developer) on which would be built 6 floodlit outdoor courts, a Clubhouse large enough to facilitate considerable membership growth, and other supporting facilities. Additionally, there would be sufficient space for further outdoor and indoor courts.

At an AGM in March 1994, the outline scheme was presented to the Club members who received the proposals enthusiastically. Negotiations with the developer continued through 1995 and in 1996 the Steering Committee reached agreement over the detailed plans. Work on the new ground started in the autumn of 1996 and was completed in Spring 1997. In June 1997 the facilities at Mountnessing Road were vacated and the Club received the keys to the new ground. So, on Saturday 14th June 1997, the club members finally moved to their new site and play began the next day on the new courts.

In the period up to 2001 BLTC consolidated its new site, with a major landscaping project with a tree shelter belt completed in the spring of 1998. The roadway was resurfaced in 2001 and in May 2001 BLTC added two new floodlit courts (7 & 8). In September 2001 work commenced on supporting alterations to the clubhouse and refurbishments of the entrance roadway.

By July of 2002 the new courts had been completed, carpeted and floodlit and were fully operational.

In 2005 the club added an additional 2 artificial grass courts (9 & 10) making a total of 10 courts all of which are floodlit to a very high standard. Also, in 2005 the club became a Performance club for the very first time in its history.

2005 marked the 50th Anniversary of the Billericay Lawn Tennis Club. To mark this event an anniversary party was held at the Club on Saturday 10th September. The event featured tennis matches played by our junior members, a lunch and afterwards a match was played using wooden racquets by our adult members. During the afternoon the two new courts 9 & 10 were formally opened. The then club President, Eileen Booth, had a small book produced to commemorate the occasion (see photo). A copy of it is in the All England Lawn Tennis & Croquet Club library at Wimbledon.

Over the last few years the Main Committee has continued to upgrade the facilities by, amongst many other things, adding CCTV security protection to the clubhouse and grounds in 2007. In the same year sound equipment was purchased to allow for both music and loudspeaker announcements both internally & externally.

In 2009 the car park was completely resurfaced including car parking lines, and a wonderful BBQ and sun deck area was built by members to the north side of the clubhouse. In December 2009 the club introduced a new online court booking system to replace the paper booking sheets. The system allows full adult members and intermediate members to book courts from the comfort of their home on their PC. Also, in 2009 planning for a major project, the installation of an airdome over three tennis courts, started in earnest.

In 2010 new bench seats were added to all 10 courts and a new planning application for an air hall to cover three courts was made to the local authority.

In 2010 all the plans and business case had been completed and the planning application was presented to the council. In December 2011 the planning application for the airdome was refused by Basildon Borough Council. In December 2012 planning permission was granted by Basildon Borough Council and finally, in October 2013 the airdome and artificial clay courts were installed on courts 4, 5 and 6.

In March 2014 a new online membership system was implemented to replace the spreadsheet-based system. The system allows members to update their own personal details and automates many manual tasks at renewal time.

In October 2014 the club became a limited company and changed its name to Billericay Lawn Tennis Club Limited.