You are here: HomenextTopicsnextPlacesnextChurchesnextMost Holy Redeemer 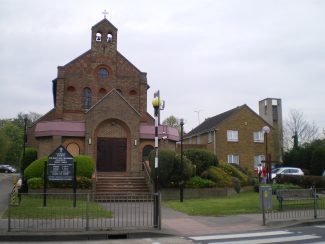 Most Holy Redeemer celebrated their centenary year in 2010 with several events marking the celebrations. Bishop Thomas McMahon a newly ordained priest approximately fifty years ago would celebrate Holy Mass at Most Holy Redeemer. About sixty years ago, Canon Roche who was the parish priest then, initiated the 11.00 o’clock Mass enabling nurses to attend Holy Mass as they worked at St. Andrews Hospital and lived in Frizzel House in the High Street.  After he celebrated Mass in Billericay, he would cycle to Laindon to celebrate Mass there.

The monks of Lindisfarne brought the Mass and the Sacraments to the district and a band of Irish workmen constructing the railway line erected a hut for their accommodation which was also used as a centre for Mass for the Catholics. The former Council Offices No. 108 High Street was used when the workers left. The Temperance Hotel was sometimes used and Dr. Waldron also gave one of his rooms in Norsey View for this purpose too. Stockwell Hall also known as the Clock House was another place used for the Mass whilst Miss Raphael was in residence. Later, St. Edith’s, no. 129 High Street was turned into a chapel by the Ursuline nuns and was demolished in 1961.

After the nuns left, Mr. William Dunn of Lilystone Hall contributed half the cost towards the Most Holy Redeemer. He lent the rest of the money free of interest.  The land on which the Church was built was believed to be the town cricket field originally and was a gift from Mr. Edmund Cole. His sister Agnes Cole was a consistent benefactor. The organ given by the licensee of the Rising Sun was played by one of Mr. Dunn’s daughters. Julian Field was one of the first altar boys.  Since then, we have had many altar boys and now girls too. Herbert, my husband played the guitar Mark and Lloyd my sons played the church organ in the 11 o’clock choir totalling approximately twenty five years with myself later joining the choir too.  Ruth Abelard played the organ too. We had a fine group of musicians and singers. Bill Smith played the vital role for the music at this Mass. The parish is a thriving one with many contributing towards it over the years.